What the National Congress Party has Done to Sudan?

The National Congress Party of Sudan and what the heck polices of the Islamic Satan!

Didn't you see that?

Yes, this is a sort of Satanic party using Islam. However, I don't believe in Satan. I believe any bad person is a Satan himself, or herself, though. 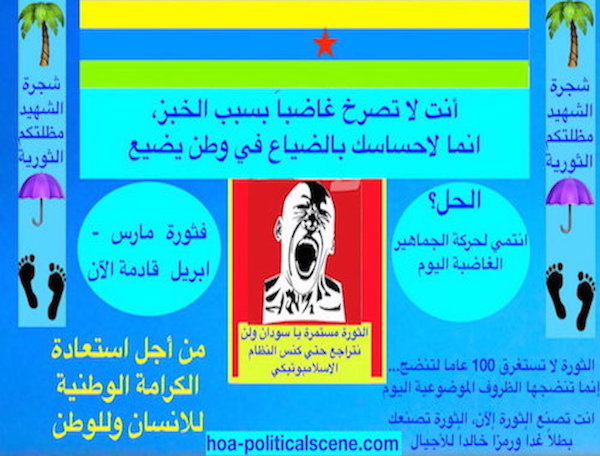 hoa-politicalscene.com/national-congress-party.html - National Congress Party is the devil itself wearing Islamic jubahs. Sudanese people don't cry of hunger, but of lost. So, fight harder to free Sudan.

With the National_Congress_Party leading Sudan since 1989, there is no Sudan any more, but, only a devastated and seceded land ruled by Islamic thieves and the chaos they make everyday. 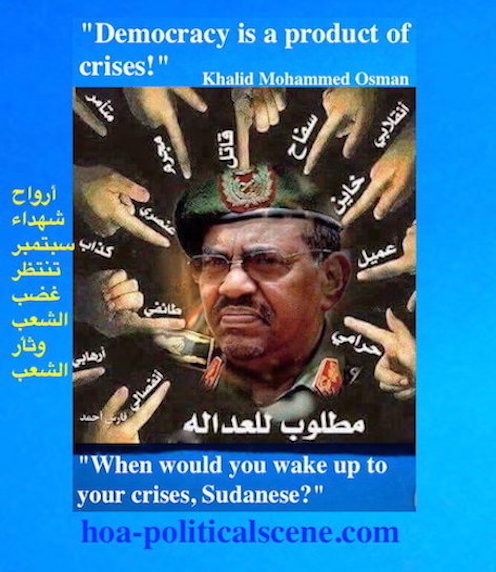 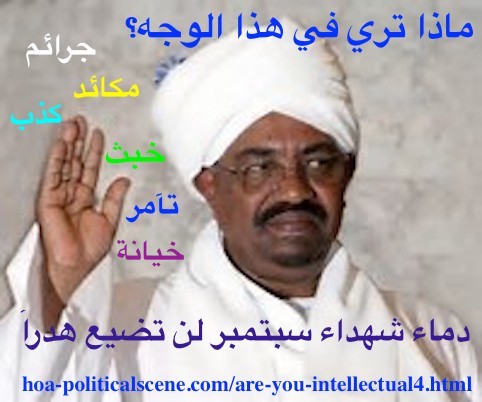 Believe it, or not, the Sudanese political scene is so devastated, erupted and fragmented by two different kinds of policies; the aggressive acts, and the tricky politics of the totalitarian regime of Omar al Bashir, the wanted criminal by the ICC, since the indictment day some 10 years ago, which we call the military religious regime. 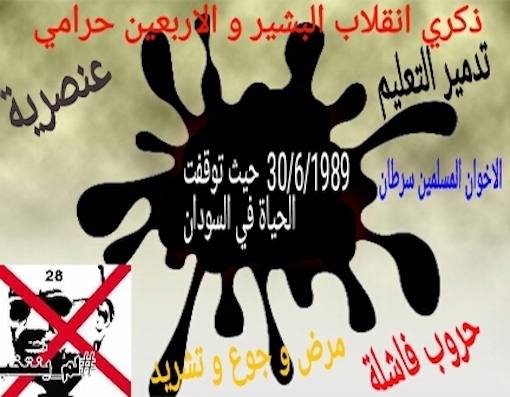 hoa-politicalscene.com/national-congress-party.html - National Congress Party: Sudanese people, you should choose the revolution to conquer the regime of the criminal Omar al Bashir now.

When this party came the first time to assume the political power in Sudan through its coup d'etat, it wasn't called by this name, but the National Islamic Front (NIF) led that time by the deceased Hassan Abdullah Al-Turabi. 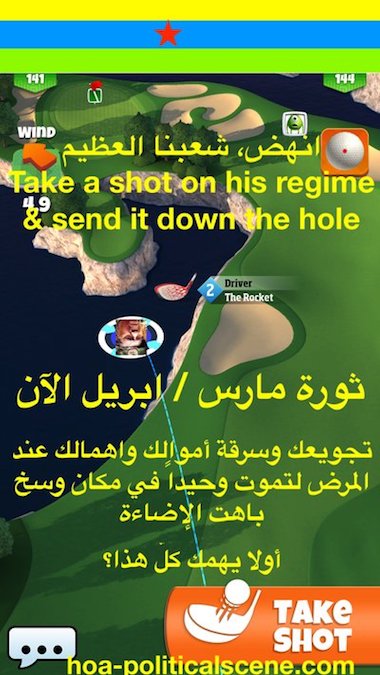 Despite that they conspired against the malfunctioning democracy in Sudan led by Al-Sadiq Al-Mahadi's government who is in fact the brother-in-law of the deceased Hassan Abdullah Al-Turabi (No mercy upon him at all) and no mercy upon anybody who destroyed the beloved state of Sudan.

So from this composition, you'll see the political problem in Sudan clearly. 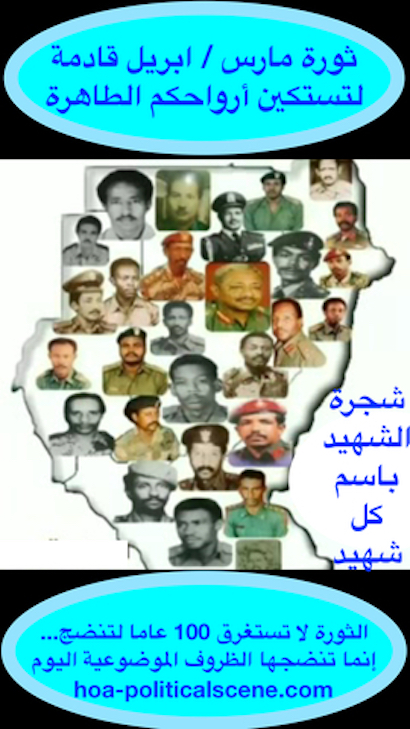 We are just such a people of such kind of stupid family relations that could possibly destroy an entire land. That has happened, actually, because by these stupid measures of relations, they have in common, they can rule and use them to destroy the most biggest land in Africa. 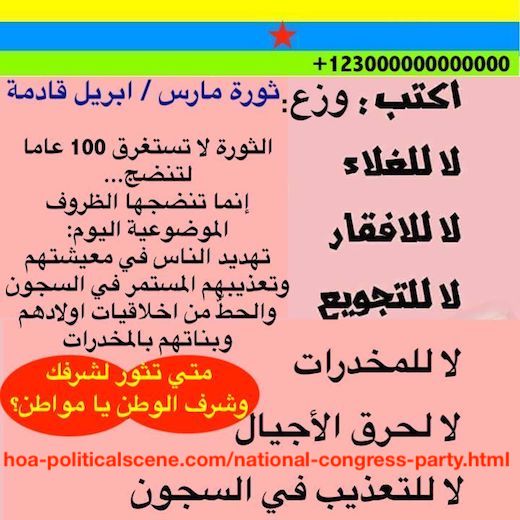 A couple of years after having assumed the power the Islamic leaders of the party disagreed on some political topics and planned having reached a point to disagreement. Al-turabi and some followers left the government to build another party by the name of the People's Conference Party, which is of course another Islamic party. 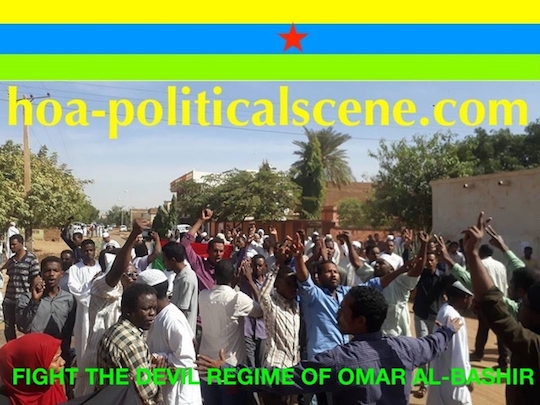 The two parties are in fact the same and one party playing on the polices of fragmentation, which is so in other words a policy of many arms I called the octopus' policy, or the policy of the octopus arms, at some links below: 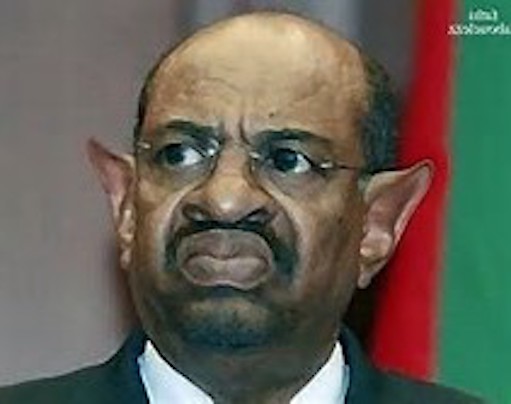 I believe that even if the totalitarian government of Omar Hassan Ahmed al-Bashir imprisoned or even killed anyone from the other wing, then this will never prove that the two wings are different.

This is because the Muslim Brothers Party is mainly planned to have the policies of the party to continue, no matter what will happen to the leaders. One of the policies of this party is also to plan conspiracies of fragmentation and play with different wings to rule the political scene for as long as it takes. 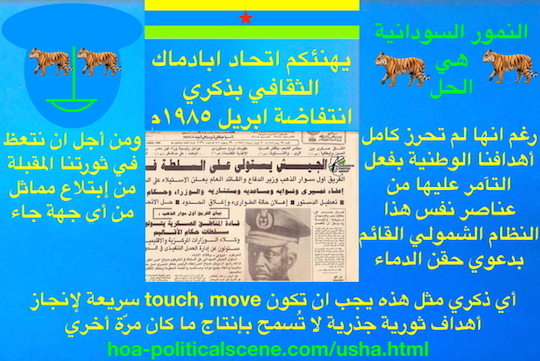 hoa-politicalscene.com/national-congress-party.html - National Congress Party: The Sudanese Tigers Revolution is the only solution to get rid of the regime of the criminal Omar al Bashir of Sudan.

Such policies are well-constructed through history, since the independence of Sudan in 1956 and they are based on the use of disguised strategies every decade to rule the period and mislead other right-wing parties and the people, alike.

The virtual evidence is that they changed the name of the party every decade to suit the requirements of that decade.

Although this was ostensibly, but it essentially means that they have been constantly planning the policy of the stages smoothly, which the other parties whether from the right-wing, or the left-wing were lacking.

Tell Us What You Think of the National Congress Party of Sudan!

Know more about the National Congress Party of Omar al-Bashir of Sudan?

Use the comments form below to write your comment and build your own page on comments on Sudan in the Comment C2 Entries in the Horn Africas Network.

See Kordofan to know more about Sudan and some historical and documentary movies on Sudan at TVCinemaApp.com.