Omer Sharmarke was nominated to engage the post of the prime minister by the leader of the Somali Islamic Courts Union (ICU) and that time president of Somalia, Sheikh Sharif Sheikh Ahmed and failed to bridge the Somali gaps. Did you know why? Bring it on.

The new Somali president Sheikh Sharif Sheikh Ahmed nominated Omer Abdirrashid Sharmarke to lead the new Somali government on 13 February 2009. They elected and approved him as prime minister on February 14, with a vote of 414 in favour, 9 opposed him and 2 not voting. 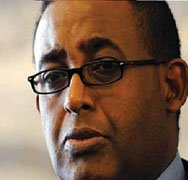 They considered the approval as a successful attempt to shore up support for the Transitional Federal Government (TFG) both among the Diaspora and within the country.

The nomination of Omer Sharmarke was widely welcomed. A spokesperson for the Islamic Courts movement described him as an "honest" man who should bring "positive changes" in Somalia. Political analysts are also optimistic about the selection.

Observers along with some political powers in Somalia consider Omer Ali Sharmarke as someone who could potentially bridge the gap between the various groups currently competing for influence in Somalia, as he lived abroad and thus he is non-allied to any group.

However, others have the impression to consider and judge him by his tribal background as Majeerteen. Those who look this way always want to see Somalia through the tribe's eyes.

It is just that Somali composition of clans and religion that still encourages many warlords to form Somali political parties, to deepen the Somali political problems and destroy the remaining parts of the state of Somalia.

Sharmarke's appointment is also seen by some analysts as an attempt to secure the favour of the large Darod clan, whose Majeerteen branch both Sharmarke and the outgoing President of Somalia, Abdullah Yusuf Ahmed, are members of.

Omar Sharmarke made speech on his acceptance day and pledged to encourage reconciliation and to unite the devastated Somalia.

However, Al-Shabaab Islamist insurgents (the Somali troublemakers) who are currently waging war against the Somali federal government condemned his appointment. The spokesperson of the group said about the nomination, "an unlawful camel never gives birth to lawful camel".

Some people question the abilities Cumar Cabdirashiid Cali Sharmaarke has to succeed and save Somalia, because the shelling continues between the forces of the transitional federal government and the insurgents since more than two years.

It is definitely a hard job for Umar Sharmarke. He finds himself on the Somali hot tin roof without having great abilities to address the political challenges of the country.

However, an optimistic look has given him advantages to lead the new government as a non-allied person to any of the groups and a national figure.

In a meeting in Djibouti attended by President Sheikh Sharif Ahmed and other Somali politicians and international observers, Sharmarke appointed Sheikh Abdulkadir Ali Omar, the Islamic Courts senior ground commander, as the Minister of Interior.

He appointed also the former parliament speaker, Sharif Hassan Sheikh Adan, as the new Minister of Finance and the scholar, Mohamed Abdi Gandhi, as Minister of Defence.

In addition, he appointed three women as Ministers of Health, Family Affairs, and Rural Development. The new Somali Cabinet easily gained a parliamentary vote-of-confidence. Omer Sharmarke and the rest of the federal government then relocated from Djibouti to Mogadishu.

In one of his speeches lately, Omer Ali Sharmarke appreciated AMISOM for supporting the government to bring peace and stability to Somalia.

He wrote an article published on the magazine of AMISOM, the British Times newspaper and the International Herald Tribune denying Somalia to be the ultimate failed state beyond help of popular perception.

He recalled some Somali terror events and the international peace efforts in Somalia in the last two decades and called for more efforts to restore the stability to Somalia.

You can read the article at the Somali Political Situation here.

Therefore, he suggested a style of strategy like that one prepared for Afghanistan. He calls for more efforts to train the Somali army to fight the Somali rebels described by the international media as linking to al-Qaeda.

Is this a quest for peace or war?

How it happened that Omer Sharmarke forgot the ties of the ICU and Alshabab?

Omer Sharmarke also pledged for help to treat the Somali pirates in an interview in Nairobi, Kenya with the Associated Press.

Continue at the second section of the page below the comments form and read why some Somalis call to change the Somali Prime Minister.

In addition to Omer Sharmarke, you may also be interested in the Somali topics at the Somali site maps, the Somali main pages and the Somali commentaries below:

I'll make them beautiful sildeshows and videos for you to enjoy watching and to call your friends to watch on the Horn Africa's  Network.

Well, before Omer Sharmarke failed to address the Somali political problems, I posted this page asking the following questions: Now consider his role as a respected Somali figure and answer the relevant questions, or write about what he could do to save Somalia.

Could Omer Sharmarke save Somalia?

How Could Omer Sharmarke Save Somalia?

What do you think of the new Somali Prime Minister, Umer Sharmarke?

Did you know any information about the people in the Somali political power?

Did you know the tribes and clans they belong to?

Did you know any information about the tribal map of Somalia?

Let us read your answers to any of these questions through the following form on this page.

You can Forward HOA's Political Scene to your friends and tell them read and comment on this article about Omer Sharmarke. You can also share it with your social media services through the buttons at the top or at the bottom of the page.

Comments, or new articles about Omer Sharmarke appear at the second section of the page above. If you have not commented, or written about Omar Shermarke, please do that right now.

I use the following website building and optimizing tools to empower this page about Omer Sharmarke and the entire network. Click on the image below to read about these tools.