Could You Sense the Political Scene in the HOA?

I can't sense a political scene that consists in most of the states in the Horn of Africa and the surroundings of tribalism and religious domination, where the average person is subjected to humiliation.

The Horn of Africa's political issues reflect on the scene of politics and thus the page you are reading intends to highlight the events, encourage positive thinking and entice folk to get together, if they dare to sacrifice some of their personal interests for the sake of their nations. 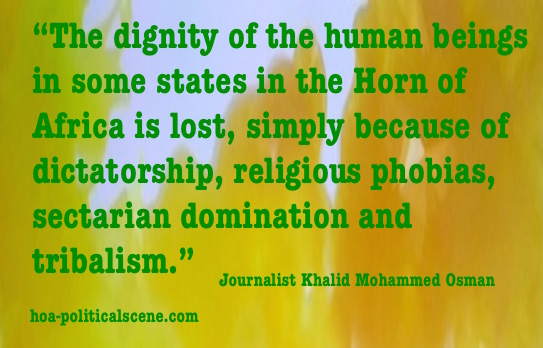 The dignity of humans in the Horn of Africa is lost, because of more than two decades of dictatorship.

The political scenery is bad, indeed in many countries to the standard that some religious and sectarian parties dominate it since the independence of Sudan and other seemingly known as revolutionary fronts control it for the sake of their own political interests, which are different and sometimes contradict with each other.

We sincerely want you to listen to the HOA calls to invest your time to understand how the scene of politics in these states develops since the independence of the HOA states, read the main pages, think positively of solutions and get together with some other people who have the same social political ideas as yours.

The Tragedy of the Political Scene!

They even make the political plot so complicated in the scene of politics by organizing some fractions to demonstrate the existence of the Sudanese opposition to serve their capital of interests.

The NIF, which is composed of the Muslim Brothers of Sudan uses this policy to manipulate and keep controlling the political system through the People's Conference Party of Sudan, which is the same ruling military religious regime led by Omar al Bashir.

Obviously, they all use the political illiteracy of the Sudanese cause, which they have already created since the independence to suggest that they are the only capable political figures to rule the Sudan and control the scene of politics to serve their capitalist interests.

Burning the political stages is the policy they are good at. The people are fed up of weak opposition. However, when some of them try to fuel demonstrations and control the uprising, the recent regime gets mad and the Sudanese regime's political crimes increase.

Almost many people who understand how the political scene functions in Sudan know that we need revolution in Sudan, but they lack the sincerity needed to sacrifice self-interests for the political interests of having democracy, social justice and integrity in the million miles square land.

The Political Scene in Other States in the Horn of Africa!

The scene of politics in other states in the Horn of Africa is not so different from that of Sudan's and maybe except the scenery of politics in Eritrean, which is somehow revolutionary and proves that it takes the challenges, whether it is controlled by revolutionary dictatorship or not.

We need to differentiate sometimes and understand the different circumstances, as Eritrea is not like any other state in the region.

Well despite this fact, here we go ...

Hot Issues in the Scene of Political Spots:

The scene of politics in the two states in the Horn of Africa, Eritrea and Ethiopia is different from that scene in Chad, Djibouti, Kenya and Somalia. But it is not different somehow from the political scene in the Democratic Republic of Congo (DRC), Rwanda, Somaliland and Uganda.

I knew since the time some of these revolutionary fronts existed and from journalistic engagement with them most of their ideas. The fact is that some of them have changed their ideas and their alliances according to changes in the political views of these fronts.

The ideologies have changed, so the scene of politics. But, the Eritrean People's Liberation Front (EPLF) have not changed its political scene as a liberation front with ideal principles concerning the rebuilding and reconstructing of the damaged state and it took that as priority.

The alliance with the Tigrayan People's Liberation Front (TPLF) has changed and thus the political scene in the two countries, when the TPLF chose the wrong path to manage its relation with the EPLF, after the attempt made by Eritrea to change Eritrea's national currency from the Ethiopian Birr (ETB) to Nakfa (ERN) to replace the Birr in 8 November 1997.

The wonder was that why the EPLF have chosen the TPLF from all of the Ethiopian fronts to work with it to achieve the liberation and independence of Eritrea and the political shift in Ethiopia, although the EPLF knew the political scene the TPLF had that time!

The ideologies had changed many times even during the armed struggle. The EPLF knew all of that. So, it was obvious that the alliance wouldn't work, as expected to serve the integrity and real interests of the people in Eritrea and Ethiopia.

The confusion of the scene of politics in both Eritrea and Ethiopia has toppled and destroyed the Sudanese opposition and helped the sectarian Sudanese in this opposition to get close to the terrorist regime and work with it.

In Somaliland, the Somali National Front knew where the scene of politics in Somali is going, especially with the Somali composition of clans and religion. I had the opportunity to know how the front thinks, since the late seventieth, when I conducted some interviews with active cadres in the front.

So, the front has that vision of the predicted distraction of Somalia and worked the best way out by choosing to secede and build Somaliland.

However, it was possible that time to maintain somehow some alliances and work together towards building one integrated strong Somalia.

One integrated strong Somalia means that the religion is for God, the tribes should respect each other and the state should remain secular with values to build the dignity of Somalis as individuals who know to differentiate between blood and milk and know that God has not created them to fight each other by the name of Islam.

Watch terrorism movies at the TVCinemaApp.

In addition to the political scene, you may also be interested in the following political issues in Arabic and English:

See other political scenes at:

Please, share the page with your social media services and subscribe to the updates through one of your services at the small buttons on the page. Thanks.

Use the following comments form to comment on the page, or to write your views about such topic.

Comments on the political scene appear at the second section of the page above.