An Open Message to the Danish Authorities:

"I'm not sick," the colonel said. "The problem is that in October I feel as if I had animals in my gut." – No One Writes to the Colonel, Gabriel Garcia Marquez. 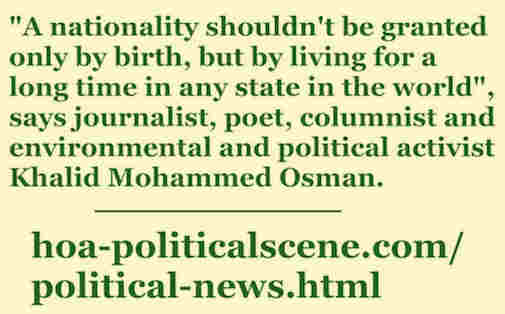 hoa-politicalscene.com/political-news.html: Political News: "A nationality shouldn't be granted only by birth, but by living for a long time in any state in the world", says journalist, poet, columnist and environmental and political activist Khalid Mohammed Osman.

Well, I am saying too, "I'm not sick," and not pausing at all I am adding, "The problem is that in Summer I feel as if I had animals in my gut."

This feeling is contingent with the climate change and what that does. It continues to endanger our lives daily, due to the collapse of our hopes, after the failure of Copenhagen Climate Change Summit.

However, the new foreign policy after the elections of 2004 is essential part of the feeling. The new regulations concerning the UN Convention Political Refugees are without a soul! Stop them! This is the first call in the political news. Stop them... because they create hatred, but not well planned integration.

There are some mistakes deep in the system but… they don't hear; totally deaf!

In a message I have received from Amnesty International, the human rights organization says the Danish government is not up to its international obligations regarding political refugees.

The second FULL STOP is this ---> see Humanitarian Network here.

I felt sympathizing with him. He has not any nationality, as the dictators in what's supposed to be his country has denied him this nationality. He has not legitimate papers other Danish, though.

The point is that he couldn't be treated as a Danish. There is no logic in it at all, since he is neither Danish, nor a person of his own nationality. But, the other point is that the Danish Flok Party (DF), which is a sort of classical egoistic party and other parties in the liberalism atmosphere in the country as a whole want him to live like that.

Not only him, but all the political refugees who came to Denmark through the UN in January-February 2001.

The procedures to grant Danish passes have stopped when the liberals came to power in 2004 and reverted and changed the laws to stop giving any grant of Danish status since that date, although those refugees came during the social democrat's term.

They conditioned the acquirement of Danish status by silly requirements, but not by the long years a person lived in Denmark. Open minds can see that there is not any logic, or sense to this act in the new Danish regulations and laws.

The political refugee thought to get back to Geneva after 5 years, and apply for a new refuge status, but from Denmark this time to prove that his situation has not been improved since the day Geneva saved him from a turmoil in Africa and sent him to Denmark. He told the political news desk.

If he happened to live these years in any neighboring country to Denmark, such as Sweden, Norway, Holland, or even Germany he could possibly have the nationality in these 5 years without any conditions. So, the question is, is Denmark better than those countries? Or is it just the egoism of the mindset of the authorities?

Some of those people who taught to be journalists and even promoted one of them to take his office have succeeded to resettle in European and American countries many years after him and they have already granted the nationalities of these states.

He said, "I'll not stop fighting dogmatism, as long as it is pertinent with egoism!" "Being national isn't only by birth, but by long residency", he added. He mentioned an example of Sudan before the collapse of what's called democracy by the coup of Jafar al-Numeri.

He said that there were so many Greek, Indians, Nigerians, and Syrians, some of whom came with the British conquest army and they have been granted the Sudanese nationality, because they lived there for a long time. When Numeri refrain and confiscated their Sudanese nationalities and expelled them, many Sudanese opposed the attempt and revolted.

"Are some countries where refugees acquire resettlement are more humane than the others?" Another political refugee asked me!

He referred to cases in Sweden and Holland, where refugees acquire passes in five years and without any conditions.

I have sympathy with him and felt also, I'll not stop fighting dogmatism wherever it exists.

Well, we have got strong debates going today here in the lights of the 1951 Convention and the 1967 Protocol relating to the Status of Refugees.

The debate is about the obligations of some signatory states under these two conventional rules to pave the way for intellectual refugees to carry on their professions and establish their own network on the ground.

"Unfortunately," A political refugee said to (Refugees Desk/Political News) at (Refugees' Alert Network), "there are some figures in the political decision making circles, who are not pleased to see any intellectual refugee, working hard to build a future out of long term careers for his or her family."

OK, do they consider those political refugees humans or not?

"They offer nationalities easily for some girls from southeast Asia. Why?"

One refugees asked me. Well, I am not sure about this. Does it happen? If you knew use the Contact Us form to tell us.

Political News will continue to open the curtain for these human comical shows.

Come join our NETWORK to be strong. Do not work alone. Use the form below.

If you want to forward Political News to your friends, you can do that when you Forward HOA Political Scene. Just type the URL/Web address of this page as the following https://www.hoa-politicalscene.com/political-news.html on the big box on the form.

In addition to the political news, you may also be interested in the following web pages on the HOA Political Scene Humanitarian Network and on the related pages:

Share the political news with your social media services, or pin one of the HOA Political Scene's Pictures on this page, or at the HOA's Gallery, HOAs Photo Gallery and Pictures for Your Website. Thanks.

The Site Build It tools on the image below are all combined in one place to help you learn and build political news website from your own personal experiences. You could actually build any business using these tools.

You can watch political news on TVCinemaApp.com and follow up. If you have any comment on this page, use the comment form to write comments on political news. Thanks.

Comment C2 Entries on political news appear on the section of the page above this paragraph and below the comments form.