The Somali Archives include pages about the political and the social development in Somalia linking to the main Somali pages and the secondary pages whether those pages about Somalia are in Arabic, or in English.

The Somali political archives may change every time you link to this page. However, the pages of the Somali main political topics and the Somali secondary pages along with the Somali commentaries would always be linked to here.

In the Somali Political Archives: The newly elected National Unity Government in Somalia has announced several plans to integrate former insurgents into the security forces.

The step came primarily to secure Mogadishu, the capital of Somalia, and ensure safety amongst the troublesome population. The plans involve reorganizing, retraining the forces and continue to expand the security program to involve all areas in the country.

News agencies quoted Omar Hashi, the Minister of Security as saying, "We want to make sure the population go about their activities without fear of being attacked or robbed," The minister stated that the new government has "inherited the TFG, (meaning the Transitional Federal Government)'s forces and we are combining them with our own forces."

Observers say regarding the mistrust between the former TFG forces and the former insurgents, that the government had to find a way to integrate the two forces well to prevent any disturbances in the future, suggesting that effective integration should seek popular support.

The new government determines many ways to ensure trust from the population. The guns have been silent now and the displaced are returning home.

However, it is still unpredictable in Somalia that the country will solve its deep-rooted tribal and economical problems. The way is too long unless the devastated country gets out of the (tribal Jubbah).

In addition, one of the most urgent priorities is to construct modern educational system in the country.

A Tip to Use While Reading the Somali Archives:

When you complete linking to all Somali pages here, use the search tool at the right column to search for other Somali pages in the Somali Archives. Enter "HOA politicalscene Somalia". You could find more information, this way. 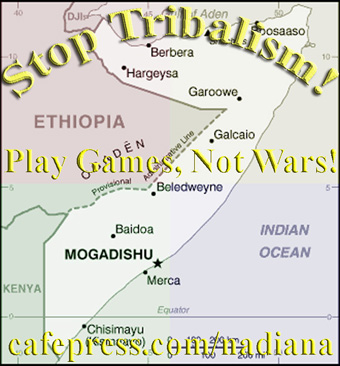 Are you from the area? Do you know what is going on? Are you fluent in English and Arabic? Freelancers needed! Fill the form here on Somali Archives and provide details about you and a summary to news or one topic analysis.

In the Somali Archives: Kenya has closed its borders with Somalia to halt defeated the Islamic Courts Union (ICU)'s militias driven from Kismayo in the south of country.

Ethiopian aircraft and artillery are backing Somali interim government to restore order by destroying the so called Islamic militias.

Helicopters and hundreds of army men and police have deployed in the border town of Luboi, while hundreds of Somali refugees are stranded at the border in bad conditions.

The so called the Islamic Courts Union (ICU) says their retreat from advancing Ethiopian and Somali forces is tactical and warns of an insurgency.

News says Ethiopian helicopters pursuing the Islamic Courts Union (ICU)'s militias attempting to escape into Kenya bombed a Kenyan border post by mistake, but no casualties or damages are registered at Har Har the border post.

Reports say Kenyan police have detained a man holding a Canadian passport who is suspected of having ties with the Islamic Courts Union (ICU).

The suspect has been held while he and other seven persons carrying Eritrean passports were caught trying to cross into Kenya last Monday.

Eritrea has been accused of sending arms and fighters to the Islamic Courts Union (ICU), a claim it denies.

The Canadian High Commission in Nairobi the capital city of Kenya said it was attempting to get information about the Canadian national but it has no details yet.

Humanitarian agencies have warned that an increasing number of children are being conscripted into Somalis fighting factions, exposing them to attacks and separating them from their families.

Various NGOs and United Nations agencies claim, the use of child soldiers in Somalia has increased since the fighting between the Islamic Courts Union (ICU) and Transitional Federal Government (TFG) escalated in December last year.

Use the following comments form to comment on the Somali Archives, or to write about arts, culture, politics, refugees, or social topics in Somalia.

You can use the form on Somali Archives carefully to write about Somalia or to add any comment. Please avoid misusing the form so as not to be blocked forever.

Remember to upload your picture and write captions to it. It is also good to elect to receive email notifications about commentaries on your post.

I use strong website building and optimizing tools to empower the Somali Archives and the entire Horn of Africa's Network. Read about these tools to know what they can do for you through the image below.