This is the Somali Political Situation! 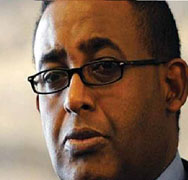 The following article about the Somali Political Situation could explain important facts in Somalia. The article is written by the former Prime Minister of the new Transitional Federal Government (TFG) in Mogadishu that time when he has been announced as a new PM. However, that is not the title of the article he has written.

It is so necessary for any political reader, journalist, or researcher to read some of the history os Somalia to understand the development of the Somali political situation well.

Here is the article about the Somali political situations.

Last December, a Somali-man, who had lived in Denmark, dressed himself in women's clothes, positioned himself at a graduation ceremony in Mogadishu and then blew himself up.

He killed 22 people, including three Government Ministers and many young medical graduates and their professors, who had hoped to dedicate their lives to the alleviation of suffering in Somalia.

The terrible events of 3 December 2009 reverberated around the world. Somali-doctors, IT and engineering graduates, alongside their families, began the morning full of hope and pride, yet they were not to see the sun set that day.

The graduates and the doctors were among the brightest and the best of Somalia, and so were the Ministers who lost their lives.

But as the recent events in Aarhus, Denmark, at Mogadishu airport and over the skies of Detroit on 25 December show, the current situation in Somalia, and across the Gulf of Aden in Yemen, not only threatens the lives and livelihoods of its countrymen and women, but also those beyond its borders.

However, despite these extremely serious circumstances, Somalia is not the ultimate failed state beyond help of popular perception.

Its people are resilient and, on a daily basis, they manage to survive in conditions that are probably well beyond the imagination of most readers.

In Mogadishu, a city of two million, people carry on, despite the fighting, the shelling, the danger, the displacement. Over 100 Somali-led reconciliation processes have taken place at local and regional level since 1991 and they have proved the basis for stability in Somaliland, Puntland and Galmudug state in central Somalia.

International peace efforts in Somalia over the last two decades have met with success and failure. While Somali reconciliation and mediation efforts will be the key to sustainable peace and stability, the international community - which means the Organization of the Islamic Conference, the African Union, the Arab League, the EU, the UN ñ has an important role to play.

Somalia and Yemen must be properly on the agenda at the London conference at the end of this month (January 2010).

As 2010 unfolds, our collective vision should be to see the beginnings of a secure, stable and prosperous Somalia, at peace with itself and its neighbors, where its citizens can go about their daily lives in safety and provide for their families with confidence and dignity.

Let us strive for a resurgent, tolerant Somali society where conflicts are resolved peacefully, built on respect for traditional Somali culture, religious values and way of life.

The Transitional Federal Government (TFG), as its name suggests, is a temporary structure for developing the enabling environment necessary to achieve this objective.

It is not the permanent Government of Somalia but a transitional mechanism that will enable the people of Somalia to decide for themselves, how they want to be governed in the future, free from outside interference and coercion.

The principal purpose of the TFG is to prepare the way for the establishment of legitimate and accountable public institutions (we have already taken the initiative and hired Price Waterhouse Coopers to ensure the accountability of international donor funds), which respond to the desires and aspirations of the Somali people.

These institutions will form the basis of a future stable, inclusive and representative government that can begin to alleviate the trauma of the last twenty years.

We will achieve this by building professional, trustworthy and representative security forces answerable to the citizens of Somalia; creating transparent and accountable public institutions based on the principles of civic responsibility and good governance; developing a fair and impartial judicial system; and increasing economic opportunity through investment, training, health and education.

Given the complex and extremely difficult circumstances that recent events have so graphically illustrated, achieving all this will be an extraordinary challenge. It will require the combined effort and energy of the whole Somali people, as well as assistance from outside.

Only in partnership with all Somalis and the support of the international community will success be possible. It will take time, determination and patience but it can be done. Let us all take up this challenge. Let 2010 be the start of something new.

In addition to the Somali political situation, you may also be interested in the following Somali articles in Arabic and in English:

Use the buttons at the right column, or at the left column or at the bottom of the page to share the Somali political situation with your social media services.

Comment on the Somali political situation, or write about it using the following comments form below.

Taking good photos is easy! Take pictures, upload them to your computer and then upload them through any form on the relevant page to your topic. Add captions describing the pictures and you are on your way to run your image gallery on the Horn Africa's Network.

I'll make them beautiful slideshows and videos for you to enjoy watching and to call your friends to watch on the HOA's Political Scene Network.

Comments, or new political articles about the SOMALI POLITICAL SITUATION appear at the second section of the page above, when you or other visitors write them down and submit the form. When you did, please take your gifts from the second page.