The Sudanese terrorist rulers political crimes are severely affecting the Sudanese nationals and their families. 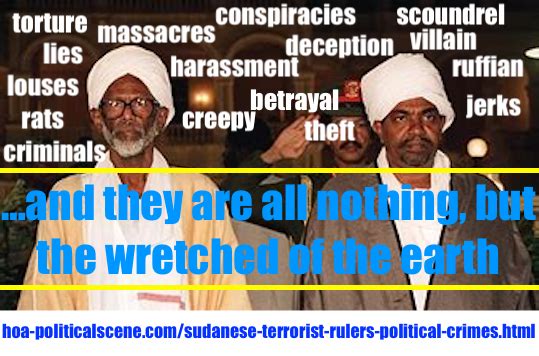 In addition to the killings every month, the terrorist political crimes in Sudan include torture in detention centers, harassment on the streets, abuses of family of detainees at security bureaus and the massacres the religious military regime commits everywhere else in the Sudanese sub-continent.

The Sudanese terrorist rulers' political crimes are numerous. But, the world knows only those political crimes committed by the Sudanese dictatorial regimes in Darfur crisis through and since the ICC's indictment and the arrest warrant issued for the leader of this regime, Omar al Bashir and some of his corrupt officials and militias involved in proxy wars in Darfur.

Nevertheless, it is well known that the crimes are part of, or the completion of the NIF's political crimes in Sudan, supervised by the fundamentally religious and terrorist regime, we call the military religious regime. 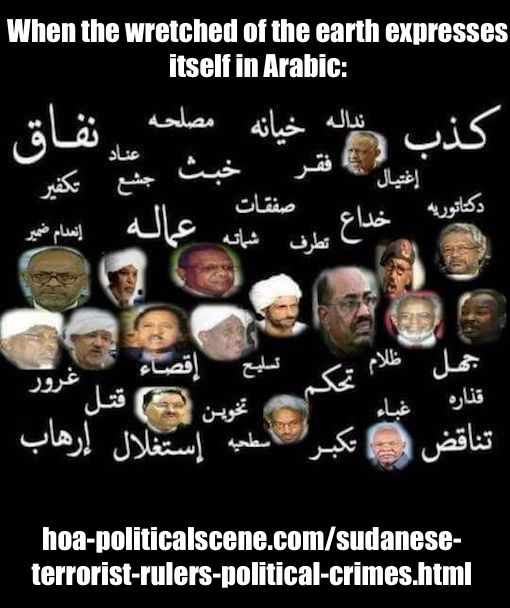 hoa-politicalscene.com/sudanese-terrorist-rulers-political-crimes.html - Sudanese Terrorist Rulers Political Crimes: Criminals in the Sudanese regime. When the wretched of the earth expresses itself in Arabic.

The Sudanese Terrorist Rulers Political Crimes are in the Universities Also!

Those political crimes committed by the Sudanese terrorist rulers and their gangs in the universities and in every place with crowds are more aggressive than the crimes mentioned by the Save Darfur Coalition.

Starting of the year 1989, and from the first day they came to power through their coup, the National Islamic Front (NIF) has come with a big list to target politically active students in the universities. They know them by names and groups.

To carry the threatening and filter the political opponents from within the universities, they motivate the students members of the Muslim Brothers and supported them by torture and killing tools.

They use also their corners in the universities to monitor the movement of the national students and simply something I call: every national student who believe that their country is Sudan and not (Kizanistan).

This is a new concept I created for states that go like this, which are supposedly suggesting terror.

Kizan, to those who don’t know is the descriptive name of the Muslim Brothers of Sudan.

They targeted them. The Sudanese president hunted by the International Criminal Court (ICC) and the issuing of Omar al Bashir's indictment and arrest warrant and all of these steps are not enough to stop those criminals. 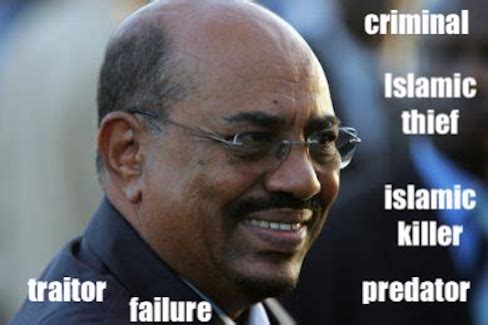 The Sudanese terrorist rulers political crimes are first indexed at https://www.hoa-politicalscene.com/sudanese-regimes-political-crimes.html and there are still some pages describing these crimes. But, I also would refer to many linked sources within this page to take care of, for more information.

What do you think of the Sudanese terrorist rulers political crimes?

Have more comments, or reports on political crimes?

Use the Comment C2 Entries form below to write that. You can upload to 4 pictures too.

Leave your email address on the second page after subbing to receive notifications on any comment on yours. The process is encrypted (secure).