Democracy is Not for the Masses in Sudan!

Democracy is Not for the Masses in Sudan, indeed. This statement is the outcome of more than half a century of watching the political development in Sudan and analyzing it, since the independence of Sudan in 1956 and until this recent moment. 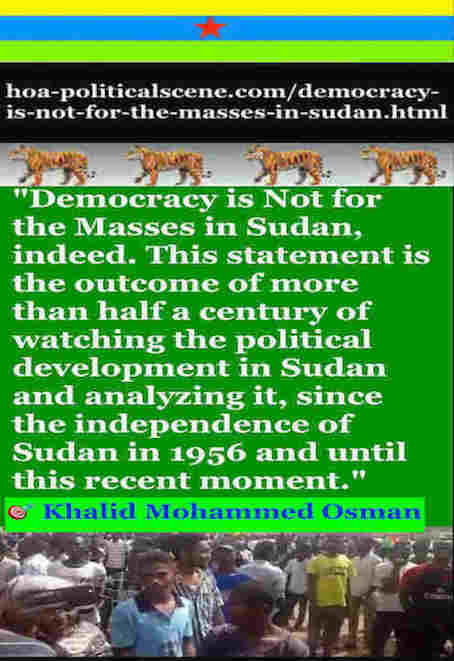 hoa-politicalscene.com/democracy-is-not-for-the-masses-in-sudan.html - Democracy is Not for the Masses in Sudan: by Sudanese columnist journalist Khalid Mohammed Osman 1.

All that the intelligent generations could see is that democracy has served for three decades sectarian and religious parties, but not the masses. So the Sudan has a sort of paralyzed democracy. Well, I called it in Arabic (al-democratiah al-Kasiha) (الديمقراطية الكسيحة).

Here is important thing to know about this topic before you continue reading it. It is one of old Sudanese series of articles I wrote, as long as I remember on Friday, May 07, 08:50:57, 2010, EDT at Democracy is Not for the Mass in Sudan and this part here is a continuation, which belongs to the English section of the Sudanese Political Articles.

The mentioned article has also gotten many comments at Democracy is Not for the Mass in Sudan Comments.

The practices of democracy in Sudan have always been missing the leads to perform good national politics, orchestrated by the organizational point of the tip of the political pyramid, which is the right constitution with its complete objective conditions.

This has a reason. That reason is present because of the way political leaders thinks of political parties and the way they think of the specifications of the state. They don’t think, the state is a secular concept.

They missed this secular concept of the state, because they always think that they have that public presence as leaders who are deep religious in their bones, which is false. 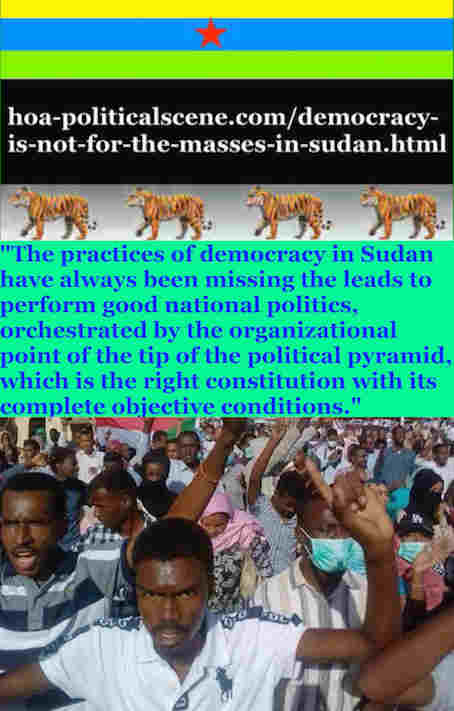 hoa-politicalscene.com/democracy-is-not-for-the-masses-in-sudan.html - Democracy is Not for the Masses in Sudan: by Sudanese columnist journalist Khalid Mohamed Osman 2.

Any claim form the defendants that says they did form political parties for the sake of the nation would be thrown away, when we come to the outcome of three periods of what's called democracy in Sudan. Not only that, but we will throw this claim away when we come to their practices through these three periods and the wealth they got form the systems they have ruled since the independence.

We will also slap this claim, when we come to the hidden fact and know that those Sudanese Political Parties have planned the devil circle of democracy followed by a coup three times in Sudan history to give no chance for a Sudanese comprehensive and fundamental revolution.to take place. They did that three times when they ended up with failures to their systems. 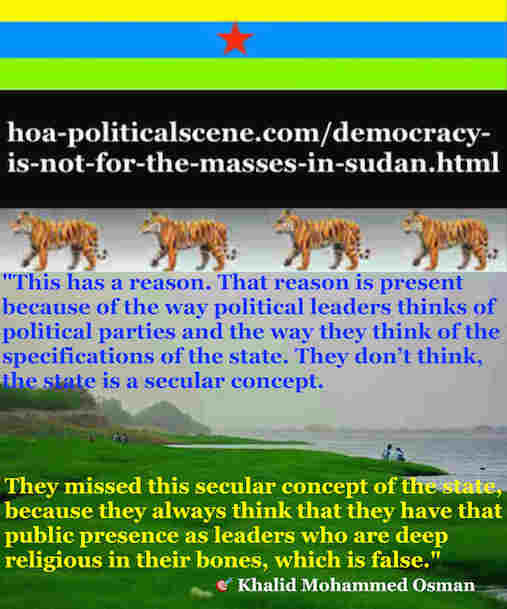 hoa-politicalscene.com/democracy-is-not-for-the-masses-in-sudan.html - Democracy is Not for the Masses in Sudan: by Sudanese columnist journalist Khalid Mohummed Osman 3.

Diagnosing Democracy is Not for the Masses in Sudan!

The Sudanese politics has become a haunting charismatic disease, through the independence, until now to the leaders of the sects. The leaders of the Sudanese sectarian parties have just got it to this standard of psychological effects of their own to think that they are born with majestic power from God to rule the mobs.

To diagnose the indicators of the Statement Democracy is Not for the Masses in Sudan, we should get into this collective mentality of the sect leaders and analyze their political behaviors since I independence until now.

This is exactly what we are doing in the Horn Africas Network and have been doing for almost half a century! Yes, the network isn't at this age, but we have the analyses taken from old scriptures to this site 20 years ago and we are continuing with the rest of old articles and of course with new articles.

The assumption that traditionally Sudanese muslims needs sheikhs of sects is fine in normal life with those people who want that. This has nothing to do with having sheikhs of sects to get involved in politics. Religion goes one way and politics goes its own different way. They will never meet anywhere.

Whenever there are different communities with different beliefs, different cultures, different ethics, different myths, different religions living in one state, then the state has naturally that atmosphere of secularism. Any interference of sheikhs of sects into the nature of the state as a secular medium isn't just indicator of tyrant behavior to dominate unbelievers, but also an indicator of our accusation that democracy is not for the masses in Sudan.

The leaders of the sectarian parties who play the role of sects sheikhs have been confiscating democracy even while they were leading what they called democratic governments since the independence until before the last coup of their allies the Muslim Brothers in the National Islamic Front (NIF), which has brought Omar al-Bashir into power to lead for almost 30 years.

At one point those sheikhs, or leaders of sectarian parties have never practiced deomcacry inside their parties and one of the proofs to this statement is that they have spilt many times to branches, so how could they submit to it to rule a diversified state as Sudan democratically?

What You Think of Democracy is Not for the Masses in Sudan!

I think democracy isn't for the masses in Sudan and so many people think so. So, what do you think?

* Use the form below to write comments on Democracy is Not for the Masses in Sudan!

* You can get more in pictures about Democracy is Not for the Masses in Sudan on documentary film at TVCinemaApp.com.

Comment C2 Entries on Democracy is Not for the Masses in Sudan appear as you see on the section of the page above this paragraph and below the comments form.