As usual, and as you see on all of the Sudanese political episodes in the Sudanese sequence of articles, I start by an introduction to the resources of the given episode.

Episode 17, Sudanese Agreements, with its Arabic version is consistent and thus compatible with other Sudanese political episodes that flow in the same direction of public orientation towards a comprehensive understanding to the political problems in Sudan, so as to achieve a comprehensive Sudanese revolution. 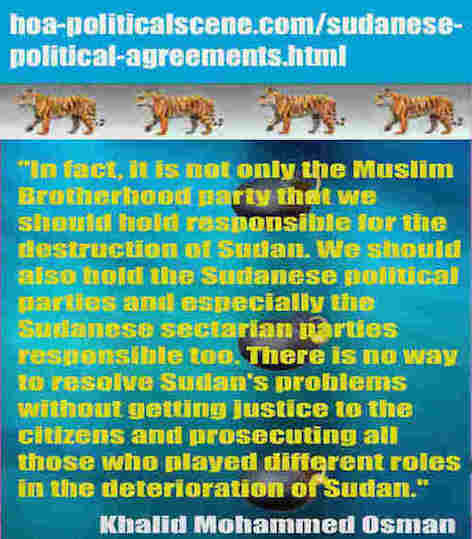 This goal will never be achieved if we still keep thinking that there are big differences between the Sudanese religious and sectarian parties.

In addition, it will never be achieved, if we keep thinking that the Sudanese army, which has been cleaned off sincere national officers can do something to repair the state, after the complete destruction of Sudan, which has been done by what's called the National Congress Party, which is one of the wings of the Muslim Brothers of Sudan.

In fact, it is not only the Muslim Brothers we should hold responsible for the destruction of Sudan. We should also hold the Sudanese political parties and especially the Sudanese sectarian parties responsible too. There is no way to resolve Sudan's problems without getting justice to the citizens and prosecuting all those who played different roles in the deterioration of Sudan. 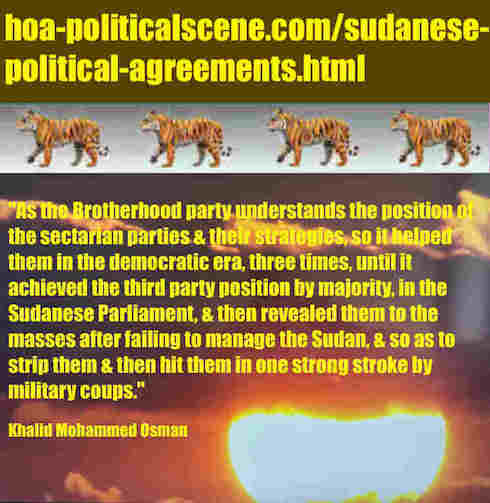 The Sudanese Political Agreements Between Illegitimate Regime and Rebel Movements!

The recent military coup was carried out by the National Islamic Front (NIF), at the time when they were the third political power by majority in the parliament of what's called democracy in Sudan.

Hassan al-Turabi was the leader of the National Islamic Front (NIF) and he is a brother-in-law of Sadiq al-Mahadi, the Prime Minister.

He found the green light from him to carry out the coup, when the leader of the Unionist Democratic Party achieved a Sudanese Peace Agreement with Johan Garang, the leader of the SPLM in Addis Ababa and returned to Khartoum, as a hero of peace.

So, the coup was planned and plotted even by the leader of the democratic government for two reasons.

The first reason was that the Unionist Democratic Party has victory over the Umma Party, which decreases the chances of the leader of the Umma Party to remain a prime minister and even humiliate him personally as a leader of the biggest party in the country.

That victory imposes the question of why the prime minister hasn't achieved that peace agreement and the leader of the rival party has it done simply and succeeded over him?

The second reason was that Sadiq al-Mahadi was envious. He has always inferior complex, that even has controlled him while he was at the thirties, as the youngest guy to lead the state of Sudan, because of his character as the son of the son of al-Mahdi, which provides him with an outstanding charismatic personality.

The Sudanese opposition stopped the armed action to remove the military religious regime and returned from Asmara, Addis Ababa, and Cairo, when the dictatorial regime, which is illegitimate regime signed an agreement called the Comprehensive Peace Agreement with South Sudan's movement, the Sudanese People's Liberation Movement (SPLM).

So, the parties of the opposition have also stopped to continue working with the Sudanese political agreements they have to expel the totalitarian regime, in favor of the regime. 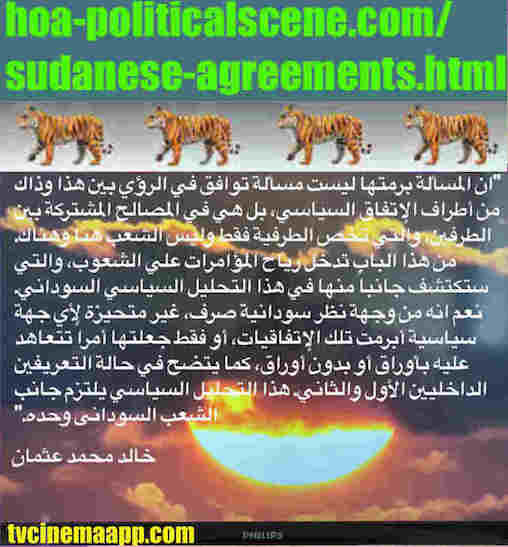 The Sudanese sectarian parties had signed Sudanese political agreements to involve in the armed struggle to eliminate the totalitarian regime.

They have been influenced by new political movements, the first of which was the Sudanese Alliance Forces of Abdul-Aziz Khalid, which since its inception has followed the method of armed struggle.

This participation of the Sudanese sectarian parties in the armed struggle was not really for the purpose of eliminating the totalitarian regime, otherwise, it would have achieved its objectives, but it was for the purpose of searching for other means to compel the dictatorial regime to listen to it.

At that time, the prime minister, who was kicked out of power by the coup against him, which was led by his brother-in-law's party, came to Asmara to say at a press conference in the Eritrean capital Asmara that God had made his way and with his companions safely to Asmara.

By the verses he used from Koran, his escape from Khartoum to Asmara was similar to the migration of the Messenger of Islam when he fled from the infidels of Quraysh in Mecca to Medina.

He cited the verses from the Koran, which are the same verses that described the migration of the Messenger of Islam to Medina.

It is a description we and some of the Eritreans in the leadership laughed at it a lot in Nayala Hotel.

When the People's Liberation Movement (SPLM) was forced to enter into a Sudanese peace agreement with the dictatorial regime of Sudan, these sectarian parties found themselves relieved, so they found a reason to their reluctance to engage in armed action.

They immediately sought Sudanese political agreements to agree with the regime on new forms of participation in power. The regime continued to maneuver around the issue, reject that once, and accept it once, in an attempt to drag some of the elements of these sectarian parties into power and tempt them with positions and wealth. 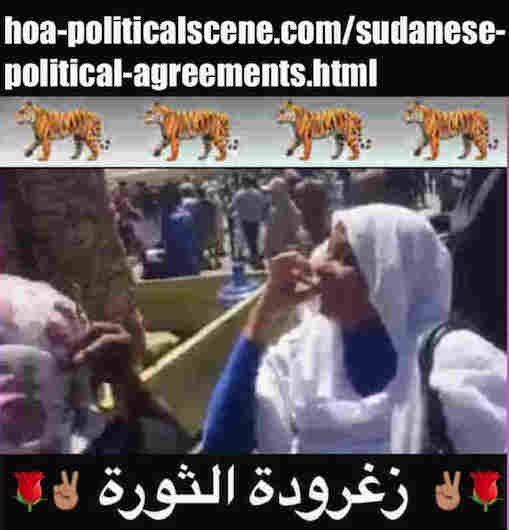 The Arabic version of the Sudanese Political Agreements is below.

Use the following form to write comments on Sudanese Political Agreements.