The Need to Lead!

The Need to Lead obsesses some leaders in the Horn of Africa. Those leaders came to power without a vision on "how to lead". 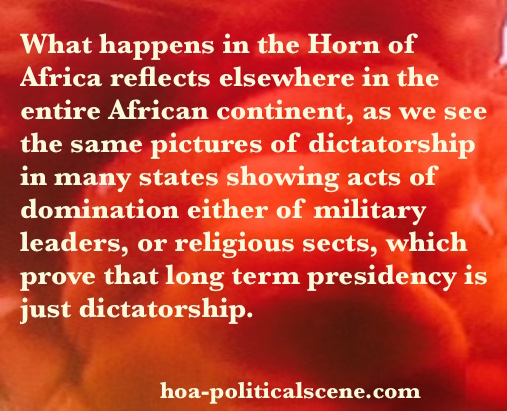 What happens in the Horn of Africa reflects elsewhere in the entire African continent, as we see the same pictures of dictatorship in many states showing acts of domination either of military leaders, or religious sects, or tribal elements, which prove that long term presidency is just dictatorship.

Watch political documentaries at documentary film at the TVCinemaApp.

The Motives of the Need to Lead!

All their interests is to sit in the political chair as long as they wish, despite the willingness of the people and their desires for democratic changes that really improve their lives.

This political imagery of leadership is still ruling, although many of the leaders lack the qualities of leadership and most importantly, the transparency and the credibility to bring the political power to where most of the people wish.

Most of the people wish to have secular states where democracy, freedom, equality, just and social interests are values that work very well through the political systems to improve their live and make it better.

But, the leaders of military religious dictatorship and religious rebels who play the game of their economical interests want only to take control of the political power for as long as they wish to preserve their interests. See Darfur rebels and make sure that such understanding is absent from the international political media.

Therefore, the leaders maintain security systems to oppress their opponents and keep them in control and when they keep revolting, the dictators fill the persons with opponents.

That is because those religious rebels are mainly produced by the same agendas of many ruling religious regimes. To explain this and get this into your mind, you should look at the facts that make the "need to lead" a necessity for both of them.

In Somalia and Sudan, for example the main religious rebel in Somalia is a fraction of the Somali Council of Islamic Courts (CIC).

This Somali religious party was created by the Sudanese dictatorial regimes from Somali students who were attending the African Islamic Institute in Khartoum, which is the main source of terrorists even after changing into Islamic university.

The African dictators came to power, either after some revolutions, or military coups, or secessionist acts, or sectarian fundamentalism.

The need to lead becomes a habit. So, they sometimes make economical problems to engage the people daily in searching for ways to improve their livings.

They also develop unrest in their countries to create an atmosphere of public fear and prevent any public action against them.

For example, the Sudanese Muslim Brothers in the (NIF) moved the army to carry them into power in 1989. Then when they succeeded they divided themselves into two parties, one in the political power and one to play with the Sudanese opposition.

They do this through what I call the policy of the octopus arms. See Muslim Brothers' octopus in Sudan.

The need to lead has no global vision. It has only very limited vision assumed by some leaders to lead only because they think they should lead. They think so because they don't see anyone fits rather than them to lead.

Some of them think that they have been chosen by God to lead. That is the need to lead illusion, which makes them feel that they are legacy leaders of their religion.

Despite the fact that few of them had chances to get high-level education in great universities in the modern world, but that high level of education have not opened their mentalities to the role of modernization, as they kept sweeping the people in the way of political illiteracy.

They use their level of eduction to prove that others don't have the right need to lead and they use sometimes the superstitions they have in their common sense to control those people and "donkeyize" them.

The Need to Lead Distracts the People!

Some of those who came from the revolution fields completed their education while they were ruling. However, they continue to rule without positive changes to modernize the ruling systems. Therefore, the intent and capacity of the need to lead are strange to them.

Some of those leaders have succeeded in getting the people fed up, following the period of hot engagement of the people in the move to achieve uprising and revolutions in their countries.

Unfortunately, the people always forget the reasons and circumstances that brought some dictators to power. When they fed up, they either ignore continuous political engagements to change the negative picture or search for just any solution that comes from the dictators.

In the Sudanese case, the solution that came from the military religious regime in Sudan made them heroes these days so they appeared as peacemakers, although they have divided the one million square mile state through the comprehensive peace agreement.

The people forgot that the coup came to topple the same peace agreement made in Addis Ababa in the late eighties before their coup. They rejected that peace agreement while their party was in the so called Sudanese parliament during the so-called third democracy, which was led by the Sudanese sectarian parties.

In the Eritrean and Ethiopian cases, the two leaders of the revolutions in the two countries forgot the strategic cooperation during the time of the revolution to engage in hatred and wars that have many negative impacts on other countries in the Horn of Africa like Djibouti, Somalia, Somaliland and Sudan.

The Ethio-Eritrean wars are the main reason of getting the Sudanese opposition in Asmara and Addis Ababa to fall in the embrace of the Sudanese dictatorial religious regime.

In Somalia, again, the composition of clans and religion makes continuous disasters in the country.

So, as long as we have the "need to lead" reflecting into dictatorship, we have serious question.

What should be done to avoid further negative impacts of the need to lead?

Share your thoughts through the following comments form and receive some useful gifts.

In addition to the need to lead, you may also be interested in the following political articles in the HOA Political Scene Network:

Please feel free to use the form above to write about the Need to Lead or about the ways those ruling classes lead.

When you did, please take care of beginning your sentences and names by capital letters, write short sentences in short paragraphs and upload pictures too. Thanks.

There is no time to waste in weeping good times in the past no one will ever get back. The beautiful history begins tomorrow.

If you thought that the need to lead is interesting and important, share it with your services at Facebook, Myspace, Twitter, Yahoo pages, Stumbleupon, Bing etc...

You can use the small buttons here below, or at the top of the page to do that. Thanks.

Have friends you think will enjoy the need to lead?

Forward HOA Political Scene to them through this page and receive useful gifts directly after that.

Here are some relevant pages to the Need Lead term. There are also some new ideas to motivate the people to seek revolutionary solutions to their political problems and capture the need to lead they want to go socialists.

That is the only solution to the political crises in the area.