Could you be a reporter, while reading deep inside the heart of the machine of the international media to analyze it and its reports? 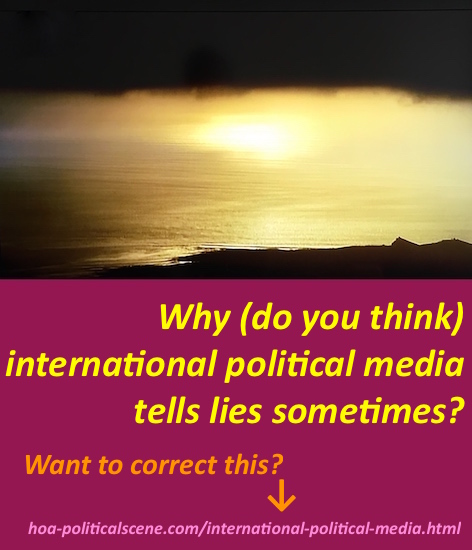 hoa-politicalscene.com/international-political-media.html - International Political Media: Great deal of news are either fabricated, or designed to serve some interests. Correct lies the media tells.

Whether you answer yes, or no, thinking about the international media that focuses on politics when it broadcasts news, performs interviews, or gets flashback on history could be very interesting to the wise newsman and the wise researcher.

So, again could you be a reporter, while reading deep inside the International Political Media?

Yes, you can. You can also be columnist or analyst. However, you can just get some insights if you do not want to be this or that and want to be yourself as is, but more sophisticated.

This page links to the International Political Media to bring you the late news with highlights and some political analyses from around the world.

All of these news sources here are in English of course. However, you can find other languages in two or three of them.

Linking to the International Political Media is important to read the news and the political analyses from different perspectives and then adjust what falls in your area of knowledge or experiences and ignore the false.

The political media in general have many different orientations and they serve different political and business interests.

In a fast developing world, the news industry gets people overwhelmed by the mass volume of the news they broadcast or publish daily.

Some people like you and me could not find the time to follow all the news and then engage in news evaluations to stand on solid grounds when we face ever-changing world and ever changing political interests.

This page however, helps you to sip with your coffee only that you want to absorb from the International Political Media and then refer to comments written by readers and visitors to this website to share your opinion, or just read for more knowledge.

If you found news about the Horn of Africa of course, and you want to comment on it, just summarize it in the form below, provide the name of the news source, the date and then follow that by your comment.

It is useful to upload a photo of the news or of you too. If you have more International Political Media sources you want to list here use the same form. However, if it is from another website, use the Political Link Exchange.

** Subscribe to HOA's Political Scene newsletter through the form you see at the top left column.

** Forward International Political Media to your friends. Enter the URL/website address into the form at Forward HOA's Political Scene.

** Tweet it and share it with your services through the buttons below, at the left column, or at the bottom of the page. Thanks.


** Write your own opinion about the news.

News wired on the International Political Media, or comments appear on the second section of the page at this spot below the comments entries form.