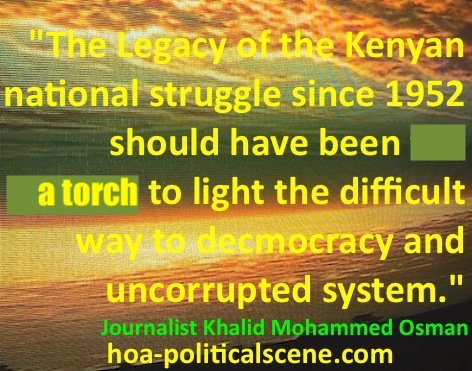 hoa-politicalscene.com/kenya-country-profile.html - Kenya Country Profile: The legacy of the Kenyan national struggle since 1952 should have been a torch to light the way to democracy & uncorrupted system.

Therefore, Moi stepped down in December 2002. Kibaki won under an anticorruption campaign. Kibaki's coalition dissolved in 2005 over constitutional review process.

Government defectors joined with KANU to form the Orange Democratic Movement, as a new opposition coalition, which defeated the government's draft constitution in a popular referendum in November 2005.

Kibaki's re-election in December 2007 brought charges of vote rigging from ODM candidate Raila ODINGA and unleashed two months of violence in which as many as 1,500 people died.

UN-sponsored talks in late February produced a power sharing accord, bringing ODINGA into the government in the restored position of prime minister.

Legislatives: the National Assembly or (Bunge) is usually referred to as Parliament with 224 seats; 210 members elected by popular vote to serve five-year terms, 12 nominated members who are appointed by the president but selected by the parties in proportion to their parliamentary vote totals, and 2 ex-officio members.

Forum for the Restoration of Democracy-Kenya or FORD-Kenya (Musikari Kombo);

Here are the political pressure groups in Kenya:

Roman Catholic and other Christian churches;

Climate: tropical along the coast and arid interior.

Languages: English and Kiswahili are official. There are also numerous indigenous languages.

If you are interested on Kenya landscape and beautiful sites connect to Kilimanjaro, Serengeti and the Massai.

If you want movies shot in Kenya, see TVCinemaApp Blog.

There may be inaccurate information in Kenya country profile because it is old. You can correct this, if you think so to update it.

You can use the same form on any other pages to write about that country in the Horn of Africa or that topic.

While going through this process, please elect to receive email notifications about your article or comment; and do not forget to download your Thank You gifts for using this form. Those gifts are very useful.

Just use the form on this page and get some invaluable books to read. The books are good to improve your life.

New information concerning Kenya country profile & comments appear at the section of the page above and just below the comments form. Make sure to read the relevant pages and please like, tweet, or share with your socials. Thanks.

Are you from the area? Do you know what is going on? Are you fluent in English and Arabic? Freelancers wanted! Fill the form here and provide details about you and a summary to current news or one new political topic analysis.

The Site Build It tools at the bottom of Kenya Country Profile empower the HOA's Political Scene network. You can use them too, to build and empower any idea in your mind.