Warm welcome to the new readers of the newsletter and special welcome to one of our friends, an x-liberation fighter in our old liberation front the Eritrean People's Liberation Front (EPLF) and one of my best colleagues in the media.

Champagne and music, friends and have some cheers in his honour and the honour of the other new readers.

There are two articles in this edition of HOA Political Scene 36.

The first article is about the Arabic media in the gulf and the way they publish news without following them by good political analyses, especially when they intend to support the ruling party in Sudan.

The second article is about the fate of thousands of hungry people in the South Sudan at the time that the referendum approaches very fast and the international powers concentrate on the referendum more than they do with the situation of the people. 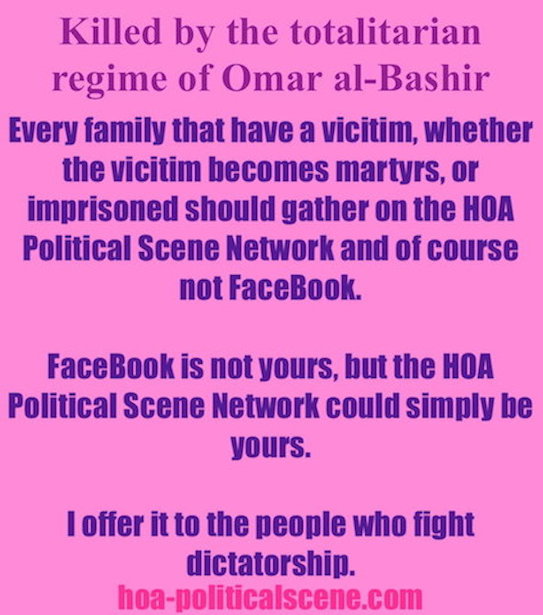 hoa-politicalscene.com/hoa-political-scene-36.html - HOA Political Scene 36: Victims' families, should gather on the HOA Network and not FaceBook, because that's not yours, but HOA could be.

Invitation from the Chief Editor of HOA Political Scene 36!

This is of course in addition to the sticky columns of Twitter, Beauty of the Words and Love Talks. I invite you to write articles on the newsletter taking the same anthem we blow here towards national, social and fair politics in the area.

Have a nice reading and please do share your opinion and forward HOA Political Scene 36 to your friends encouraging them to subscribe and forward it in turn to their friends making the same recommendations and so on.

That would probably increase the numbers of subscribers in the database and offer them options to reorganize them with USHA and use the USHA Project as their own to refresh the political life in East Africa and bring positive political changes.

Why the Media in the Gulf Supports the Dictators in Sudan?

The Gulf News says Sudan plans to build a front against the western interference in the country. This news item is either paid news item or positioned news item in favour of the dictatorial ruling party, called the National Congress Party (NCP) in Sudan.

Moreover, posting such news item without analyzing it pours in a deserted ground, seemingly of political illiteracy, the Arabic area in the gulf suffers for decades. They of course play the policy of (the pregnant is deaf), where the Sudanese proverb refers to the ear of a pregnant woman, just to differentiate this from a pregnant man.

The very important question in this regard, the gulf media neglects, is who is responsible of opening the country to foreign interference! I think the media in the gulf is good to indicate that it is one of the (birds of a feather flock together).

This is one signs of the political ignorance in the area. They described the leader of the party as the lion of the Arabs. They forget that they described the military dictator Jafar al Numeri, before him as the tiger of the Arabs before the people of Sudan expel this tiger out and sent him to the historical garbage of bad leaders.

Not only that, but the media in the gulf also does not have the sense of following the political history of those parties in the area to analyze their behaviours and the policies that are directing them from the surrounding area or from the international area.

It is not strange that some rightist parties such as the NCP try sometimes using anti propaganda against their creators to deceive the public and the others who stand without good political visions in the area. Therefore, this front the party plans to build against the western interference in the country is just one of their propagandas.

The people in Sudan are not ignorant, although many rightist parties tried since the independence of Sudan in 1956 to tie those people by sectarian beliefs and religious beliefs to be obedient and help them carry on building capitalists systems.

The rhythm of the global technological development helps those people read more, connect to each other, acquire more ideas, and be active to participate in real political groups that could help them in their national struggle.

We at USHA call all the nationals in Sudan, Somalia, Eritrea, Ethiopia, Kenya and Uganda to join the USHA Project, help each other, get united, be strong and work to achieve the desired political shift in East Africa.

We know, it is time for the people. We know it is the age of the people and none can stop the people to achieve their goals. Get cracking to crack the political code in the area.

I will keep on fighting this fraud regime even I became the only man in the world to fight it alone.

You can at the same time, share HOA Political Scene 36 with your social media / social network / social bookmarks like facebook, twitter, my space and any other media using the small buttons on this page.

Equipments for the Referendum are More Important than Hungry People!

Tensions and frustration increased, as referendum registration approaches fast and food merchants from the north in southern Sudan expressed their fears saying that they now feel like foreigners and they began to flee the south before the foreigners did.

While tens of thousands southerners who returned home to vote are hungry in the camps, news from the United States said President Barack Obama has lifted a ban on the US aid and the government assistance for Sudan to allow exporting computers to the country to facilitate the referendum process in the south.

The referendum is more important than the lives of those tens of thousands of southerners! This is the NEWS and it worth thinking. It is of no wonder, as it is clear and it runs in the same mode of helping the NCP out of the chaotic situation the party made in the country.

In the same issue, the dictatorial ruling National Congress Party (NCP) expressed on Saturday its dissatisfaction with the voters' registration process in the north saying that there were clear violations that undermine the credibility of the process.

The party has long neglected the critique of the national powers in Sudan to the process even before the referendum commission has taken place. They said that good schedule, framework, plans and logistical processes are indeed a time consuming and they should be in place before the implementation of the referendum.

If there is any violation in the process, the party is responsible for this. It takes the responsibility because it neglects to listen and facilitate the comprehensive national conference. The other political powers in the opposition call for this conference to discuss the best ways to insure the implementation of good referendum by solving the controversial issues in the country first and before the referendum took place.


Beauty of the Words!

This (as it happens column) comes to make HOA Political Scene 36 more appealing and break that sticky stone in our feelings.


Now I will tell you about a secret here in HOA Political Scene 36. While you are at this line, refresh the page and you will read different quotes in the lines above when you did. You can either refresh the page from the top of your browser or just click on "Ctrl" and "F5" on your keyboard at the same time.

"Lovely perfume escalated from her etui in Asmara twelve years ago and it is still breathing on my face here."

All comments on HOA Political Scene 36 appear at links below the form and run through the mechanisms of the Comment C2 Entries on this network, which are incredibly outstanding. This system is powered by what I and my friends call Solo Build It.

If you wanted to enter new comment, but not to reply to comments on HOA Political Scene 36, do that through the form. Thanks.

As usual, you can use HOA Political Scene 36 to follow talkative in Twitter. This column is moved to the third right column.

Please share HOA Political Scene 36 with your social media through the small buttons on this page. Thanks.

I promise! Do not jump this right column! It is full of many interesting topics.

The Phoenix Rising on iTunes