How to Understand the Eritrean Political Differences?

Are there any important Eritrean political differences?

First of all, the importance of something defines its accuracy in connection with significance and value. Such thing has also a consequence and momentousness. However, in the case of these political differences in Eritrea, there is something concrete missing. The thing that is missing is the national value. 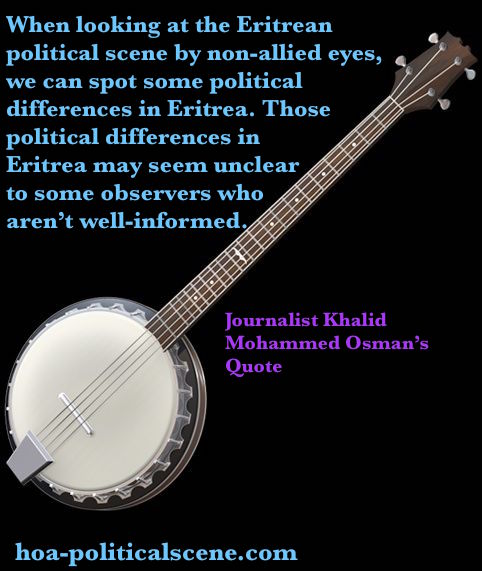 Being well-informed means that observers should have good microscopic eyes to look at the backgrounds of the Eritrean case from the first day Eritrea sprang as a nation and even before any other states were formed in the Horn of Africa and elsewhere in Africa.

During that time of ancient history… well, we could say ancient history and thus divide history into periods for concrete analyzing, I continue, the ancient Greek named the sea we know by the name of the Red Sea as the Eritrean Sea and described the land as an independent land, which is somehow different from the other lands in the area.

Later on the Italian took the description of the people to confirm it when building Eritrea as an independent state and declaring at the same time the specifications of the Eritrean nation. They even have differentiate it from Ethiopia, by saying, Eritrea is very different from Ethiopia.

The First Point to Understand the Eritrean Political Differences!

This makes the Eritrean political differences sometimes arise, although the matter is not big to threaten Eritrea, because those who make a small percentage in this understanding are either not aware enough of their national values, or just want to harm the EPLF, which is the dynamic part of the Eritrean dignity Eritrea has today.

The Eritrean fronts were either supported by Arabic and Islamic states as (the called to be as such, Sudan), Syria and Saudi Arabia, or Christian state such as Ethiopia (after the last Ethio-Eritrean wars).

In this scope the Eritrean political differences seem nothing, but impacts of the policies of the surrounding lands that have interests in this small land, although it is not as small as Djibouti.

Yes, you will say that if we got through the Eritrean political differences to refer to history, then Djibouti itself will not be Djibouti at all, but a Somaliland. You are right. However, this indication confirm at the same time that Eritrea have never been “natural” part of Ethiopia, but an annexed nation.

From such dialogue, many political differences arose. 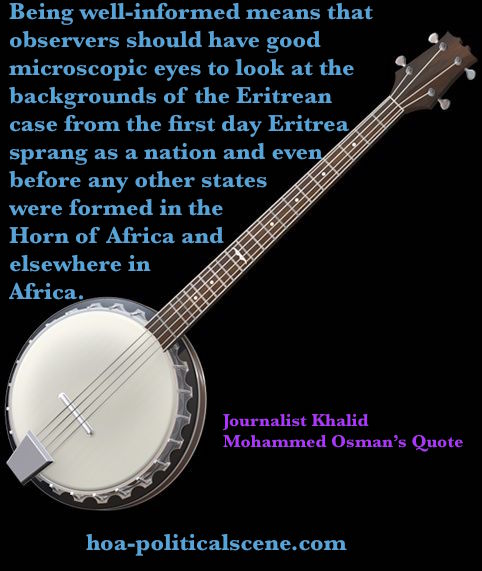 Well, until you answer this question, any attempt to know the main Eritrean political differences should start from the day the Eritrean liberation struggle began not as mentioned in the sixties, but many years before that date.

Nevertheless, the series of political articles tips on this page and other relevant pages to this topic are about the political Eritrean differences between the leading party in the country and the Eritrean opposition groups in Sudan, Ethiopia and elsewhere in the Diaspora.

Two Eritrean revolutionary principles have maintained in theory and practice the long way to the liberation of Eritrea that the Eritrean People's Liberation Front (EPLF) has crossed successfully to achieve its goal in 1991.

The EPLF was the first Eritrean revolution in the world to achieve its goal (the independence of Eritrea) through long struggle depending on its own power, in spite of internal and external conspiracies.

What are the Eritrean Political Differences?

There are two important Eritrean political differences in this regard between the Eritrean opposition (those groups that have failed in the liberation field and those who have been part of the EPLF, or have gotten some privileges to work in the Eritrean government) and the Eritrean ruling front.

There are, maybe, more differences between them, but I concentrate on only two important facts in this regard. If you know of more Eritrean political differences, use the form on this page to write them down. Thanks.

The first fact is that, many of the opposition groups have not loyalty to their nation. They haven’t proved that they have loyalty during the liberation struggle.

So, how could they prove that now while they are either working with a neighbouring land that has burned their homeland for decades and buried their relatives alive, or with some (so-called Islamic lands) that want to divide Eritrea religiously?

The second fact is that many of those who opposed the ruling party have been part, or offered positions in the government even when many of them have not any thing that I could call qualifications and because they wanted more, they invested on chances to get out of their lands and then get refuge status to join the other opposition groups.

What about many other people who have got chances to flee Eritrea and get refuge status in Europe?

Many of them fled from the recruitment program of the government because they want want the easy life and they don’t care about their nation, as long as they see every year thousands of Eritrean coming from America, Canada and Europe to participate in the annual Eritrean festival in Asmara looking very good, healthy and rich.

So, many of those who don’t want the hard way of living even for the sake of their small state, despite the threats it faces, want to live like those young people they see every year attending the Eritrean festival.

When I look to the Eritrean ruling party, the People's Front for Democracy and Justice (PFDJ) I remember the old golden days of the Eritrean struggle and the great stories of the liberation field, with thousands of sacrificing stories.

I then ask myself, why the Eritrean People's Liberation Front (EPLF) has buried itself in the ruling People's Front for Democracy and Justice, since the real liberation has not been achieved yet.

The liberation is not just about getting into power and sitting on the chair in the capital city of Eritrea.

It is worthy to mention that those people are nice and I love them very much, so I will never intend to hurt them. I am only analyzing the conditions that they find themselves living them, feeling them and getting sad and desperate for means to make their lives better and understand better.

You absolutely have comments on the Eritrean political differences. So, don’t shy away. Bring them on through this form. Thanks.

Comments on the Eritrean political differences, or new articles about those differences appear at the section of the page below the comment form.

Share this page about the Eritrean political differences with your social media services through the buttons below, or at the top of the page. Pin the pictures and subscribe to the updates of the HOA Political Scene from with one of your services on the small buttons. Thanks.