Child Care in The War Zone!

When it comes to child care in some societies I found that there are not enough serious humanitarian efforts, while many underdeveloped states like Sierra Leone (Salone), Sudan and Uganda do not care about caring for children, or child safety, especially in the wars zone! 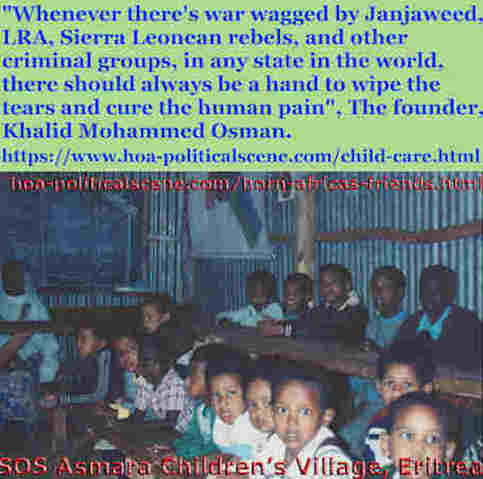 Introduction to Caring About Children!

This article has three sections, we call parts sections here. I published it so many years ago, almost twenty years and I got to it lately to revise and add to it some lines, without having to demolish the original script.

The first section is about me being a child with children and even while carrying a professional job about them and how I developed that to good production for children and carried the work out to begin being a father of many international children, through the sponsorship of children's villages.

All of that isn't about me really, but rather is about how to be inspirational in such humanities.

The third section completes covering endangered lives of children in other parts of the world beginning from Africa, specially after my discovery that the independence of many states have resulted on waste and devastated lands.

Many lands have been waste and devastated and they still are by interior conflicts, while African leaders have continued for long to control political power and wealth and neglect the hidden cultural, economical, ethnical and religious problems of their states to grow many rebels inside these societies.

Selfishness? Yes, it is indeed until this moment, where conflicts and wars erupt in so many places to prove this statement. 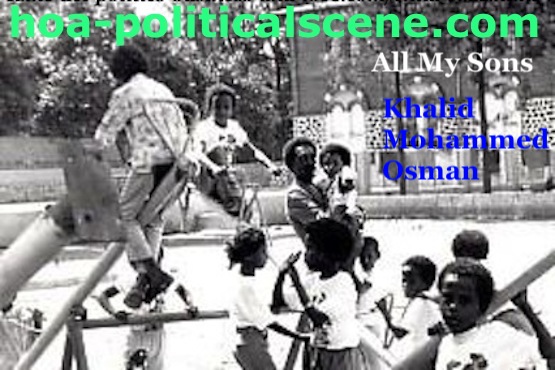 Journalist Khalid Mohammed Osman, while taking child care of all his sons in the revolutionary Salamona Orphanage in Asmara, Eritrea, few moths after independence from Ethiopia through a long war.

Everyone Loves Children! Am I Right?

To me, even before being a parent, a child love continues for children until they become mothers and fathers of children themselves and spreads to their grandsons, if the age permits living until then. In front of any children, I become a child myself.

I can't control that feeling, or the indulgence of myself into children's shoes, while am with them and I just act like them, while playing with them. I have experienced this even while I was carrying my job doing some media works and enjoyed the children's environments of the interviews and reportages I published.

No one has done that in Asmara, so the production of such children's media has created greatest wariness for the associated authorities with these issue to act, as they resulted in taking control of things, but all of that wasn't quite enough.

I had many hopes, at the time, until the second Ethio-Eritrean wars erupted stability and I fled once again to Europe. Since then, I started to sponsor Awassa Children's Village in south Ethiopia, as the Asmara SOS Children's Village has been closed by the authorities. 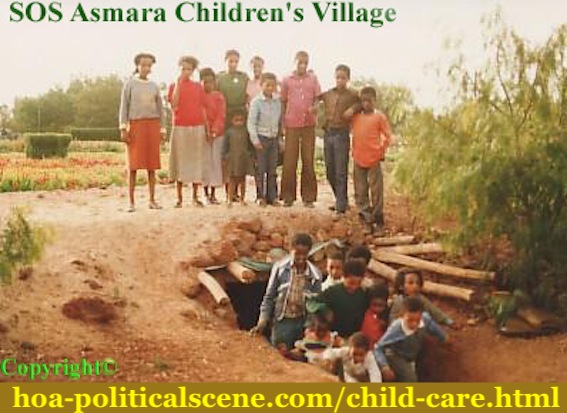 The SOS Children's Villages struggle hard against all odds to take responsibilities in many areas to save the souls of children. I knew this international organization since the nineties and have begun to coordinate and help it through my journalism activities.

I have conducted so many interviews for the first time in Asmara's history, immediately after the independence, about children of wars, children of the martyrs, and orphan children, while I was covering at the same time many issues concerning children in kindergartens, preschools and up tp the secondary schools and the children health centers.

To fulfill my goals to bring the serious situations of all of these children to the media, and then create that complete awareness about them, I really walked on foot for long distances, climbed mountains and swept from them to valleys in different places in Eritrea. Well, you knew already that the Italian have built many places up hills and many cities and villages are on the highest.

You'll get to know more about the efforts of the SOS through the Awassa pages linked here within the sections of the page.

Now, the nobelprize.org rewards its prizes for nonsense to some Africans who even don't know the organization that rewards the prize, like the Ethiopian PM Abiy Ahmed Ali.

They awarded him the prize based on what they claimed to be his role or his important work to promote reconciliation, solidarity and social justice. I noticed that the claim to reward him the prize is neither true, nor unique.

If there were any reconciliation, solidarity and social justice in Ethiopia then there wouldn't be continuing demonstrations in Ethiopia and surprisingly they have erupted after rewarding him the prize.

Second, what peace and reconciliation has he achieved in Sudan regarding the last protests, which have spread from last December?

He hasn't achieved a success in Sudan. His meditation has resulted in criminal killers like the Janjaweed and remnant of the terrorist regime of Omar al-Bashir assuming power in Sudan and those Janjaweed Banditry are the rebels who committed the Darfur genocide and the massacre of the people in the last protests. Since they are remnant of the terrorist regime, so they are part of its terrorism.

What the world doesn't know is that those Sudanese terrorists are not only the supporters of international terrorism, but the founders.

The authorities hasn't taken care of children from the start and that was because of many dangerous issues during the first years of the independence.

But, then they started even to recruit kids compulsory, as child soldiers to go to the war. I have many examples in my book "Horn of Africa's Political Tragedy" and at the HOA Political Scene.

And as I say, "whenever there's war wagged by Janjaweed, LRA, the Sierra Leonean rebels, and other criminal groups, in any state in the world, there should always be a hand to wipe the tears and cure the human pain".

Child care had been very active part of my activities as a journalist in Eritrea in the Horn of Africa. I took it from different angles while looking deep into the education and health sectors of the new independent state.

As, I was deeply concerned, I created, led and participated in some activities to share the rehabilitation and the reconstruction of the new country. For more lights, see the linked pages at the political section.

I have been engaged totally in the society while working in the news, education, politics, clubs, associations and trade unions to do my human duties with the leaders, as I did with the public. See Environment and Environment Protection.

So, child care came to my attention not only because I am journalist, but also because I love children and I have that feeling of their world.

I should have the Nobel Prize, if the donors have eyes, in this stage age.

I have done a considerable organizational work as journalist, organized and shared good parts of activities in some fields like: Children, Women, Environment, Human Rights and Countries Foreign Relations.

I had prepared some projects, planning papers, fundamental laws and other organizational materials for couple of authorities and decision making boards.

Doing just that ten years of my life, I got only a "downtrodden" status, neglected and thrown as "an old file" deep into the archives. I was not complaining and I was so satisfied that time, as the revolution taught me.

I was doing that while my poor family needed my help, living in small room, had a little money that was not much exceeding a pocket money, while those who were holding my projects and papers, were talking in meetings and regional conferences.

They were living in luxury and had full access to everything in power. They did what they wanted to do and just forgot everything about their real motivator. Believe it or not. Go there and ask.

When my friends, and those who know everything about my common activities, asked me why, I answered them only by: This country is ruled by one person, and that's the nature of the revolution when it changes its clothes! It does that unfortunately when it comes to power!

If The Blood of The People is Not "Coca-Cola"...

Oh, where are those real revolutionists, I learned from them the alphabet of all my sacrifices?

What Do You Think of Child Care?

This is the way to be responsive and useful and say thank you for the knowledge you get from this page: Use the comments form to write comments on CHILD CARE. Share the page with you social through the small buttons you see on the page. Thanks.

You can also watch CHILD CARE on documentary film at TVCinemaApp.com.

Comment C2 Entries on Child Care appear at the section of the page you see above this paragraph and below the comments form.