A goodbye kiss is a short story and an example of what you've just read about "Child Love". I think it's good for both sentimental and realistic reasons. Here, the story starts, as I received it 18 years ago: 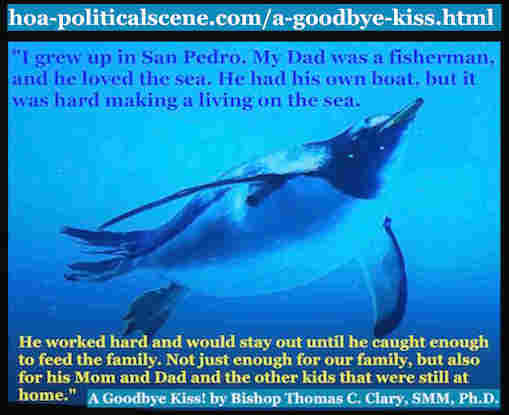 hoa-politicalscene.com/a-goodbye-kiss.htm - A Goodbye Kiss! By Bishop Thomas C. Clary, SMM, Ph.D. What you learn from this lesson is how deep your parents love goes, so you shouldn't regret.

The Board Meeting had come to an end. Bob started to stand up and jostled the table, spilling his coffee over his notes.

"How embarrassing? I am getting so clumsy in my old age."

Everyone had a good laugh, and soon we were all telling stories of our most embarrassing moments. It came around to Frank who sat quietly listening to the others.

Someone said, "Come on, Frank. Tell us your most embarrassing moment."

Frank laughed and began to tell us of his childhood.

"I grew up in San Pedro. My Dad was a fisherman, and he loved the sea. He had his own boat, but it was hard making a living on the sea. He worked hard and would stay out until he caught enough to feed the family. Not just enough for our family, but also for his Mom and Dad and the other kids that were still at home." 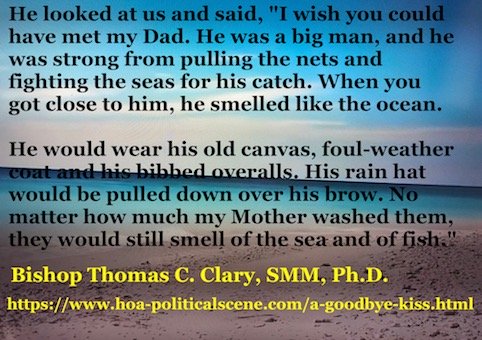 hoa-politicalscene.com/a-goodbye-kiss.htm - A Goodbye Kiss! By Bishop Thomas C. Clary, SMM, Ph.D. What you learn from this lesson is how deep your parents love goes, so you don't scatter it.

He looked at us and said, "I wish you could have met my Dad. He was a big man, and he was strong from pulling the nets and fighting the seas for his catch. When you got close to him, he smelled like the ocean.

He would wear his old canvas, foul-weather coat and his bibbed overalls. His rain hat would be pulled down over his brow. No matter how much my Mother washed them, they would still smell of the sea and of fish."

Frank's voice dropped a bit. "When the weather was bad he would drive me to school. He had this old truck that he used in his fishing business. That truck was older than he was. It would wheeze and rattle down the road.

You could hear it coming for blocks. As he would drive toward the school, I would shrink down into the seat hoping to disappear. Half the time, he would slam to a stop and the old truck would belch a cloud of smoke. 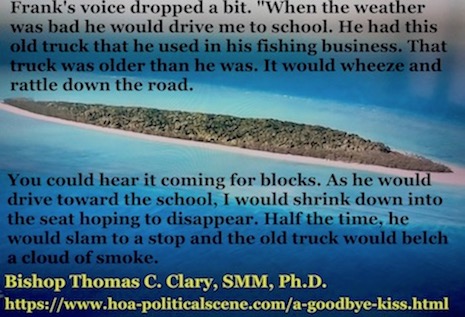 hoa-politicalscene.com/a-goodbye-kiss.htm - A Goodbye Kiss! By Bishop Thomas C. Clary, SMM, Ph.D. What you learn from this lesson is how deep your parents love goes, so you don't throw it away.

He would pull right up in front, and it seemed like everybody would be standing around and watching. Then he would lean over and give me a big kiss on the cheek and tell me to be a good boy. It was so embarrassing for me. Here I was, twelve years old, and my Dad would lean over and kiss me goodbye!"

He paused and then went on,"I remember the day I decided I was too old for a goodbye kiss. When we got to the school and came to a stop, he had his usual big smile. He started to lean toward me, but I put my hand up and said, 'No, Dad.'

It was the first time I had ever talked to him that way, and he had this surprised look on his face.

My Dad looked at me for the longest time, and his eyes started to tear up. I had never seen him cry. He turned and looked out the windshield. 'You're right,' he said. 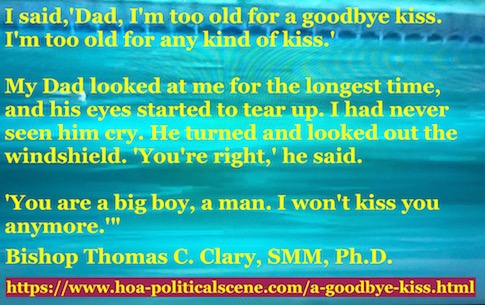 hoa-politicalscene.com/a-goodbye-kiss.htm - A Goodbye Kiss! By Bishop Thomas C. Clary, SMM, Ph.D. What you learn from this lesson is how deep your parents love goes, so you hold on it tight.

Frank got a funny look on his face, and the tears began to well up in his eyes, as he spoke. "It wasn't long after that when my Dad went to sea and never came back. It was a day when most of the fleet stayed in, but not Dad. He had a big family to feed.

They found his boat adrift with its nets half in and half out. He must have gotten into a gale and was trying to save the nets and the floats."

I looked at Frank and saw that tears were running down his cheeks.

Frank spoke again. "Guys, you don't know what I would give to have my Dad give me just one more kiss on the cheek.to feel his rough old face.to smell the ocean on him.to feel his arm around my neck. I wish I had been a man then. If I had been a man, I would never have told my Dad I was too old for a goodbye kiss." 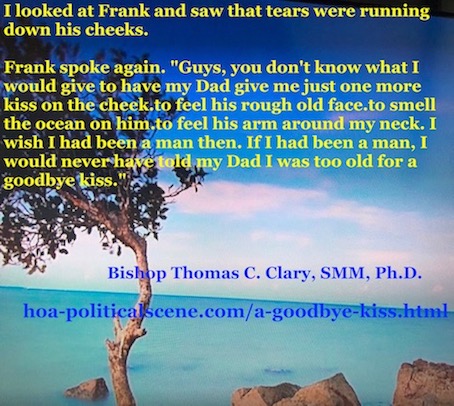 hoa-politicalscene.com/a-goodbye-kiss.htm - A Goodbye Kiss! By Bishop Thomas C. Clary, SMM, Ph.D. What you learn from this lesson is how deep your parents love goes, so you share it.

Well, that was the way an example of "child love" had gone. But we should say a father's or a mother's kiss to the kids even though they are mothers and fathers themselves is a kiss of REAL love.

* In addition to "a goodbye kiss", you may also be interested in the following humanitarian articles on the Humanitarian Network:

Tell us you liked it. It is more useful to write us story like this about such kind of parental love.

You can also watch such love on movies at TVCinemaApp.com.