Uhuru Kenyatta is the fourth Kenyan President. He won the presidential elections in Kenya with (a marginal majority) of 50.07 of the vote, and becomes Kenya's new President, as the Independent Electoral and Boundaries Commission announced on Monday, March 4. 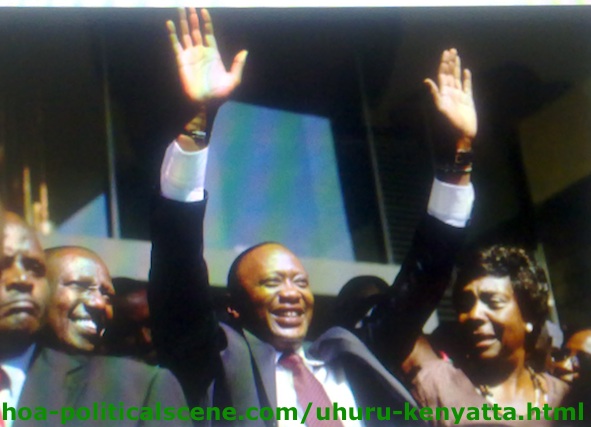 As the fourth president in Kenya since the independence of the country in 12 December 1963 from Britain, Kenyatta the son will take the presidential office from the third president Emilio Mwai Kibaki.

However, he resigned from his post and the party, when he saw that Moi favored other politicians in the party and therefore he formed the Democratic Party (DP) and participated in the multi-party elections of 1992. 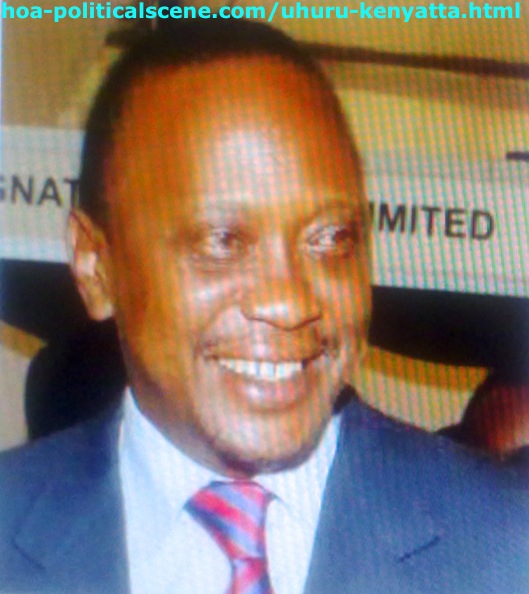 When he won the second elections in 2007, violence erupted the country among accusations that the election was followed by fraud and irregularities. 1,200 Kenyan were killed in the violence and Kenyatta was accused of buying weapons that were used in the bloodshed.

Uhuru has won 50.03% of the vote in the provisional results showed to be the standard needed to avoid a run-off race to divide Kenya along tribal lines. Tribal ambitions have escalated since a decade ago and have planned to engulf Kenya in the tribal turmoil.

Raila Odinga, the Prime Minister came second with over 43% of the vote. The Kenyan PM was quoted saying that he would not concede the election and would launch a legal challenge if Kenyatta is declared President. 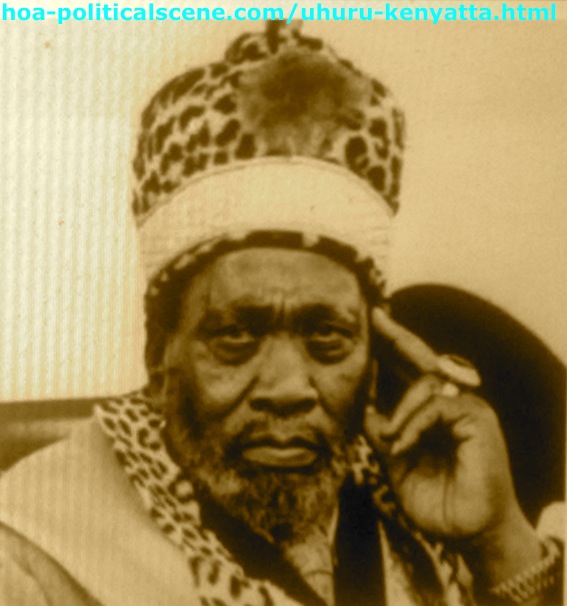 Observers say the victory of Uhuru Kenyatta will pose a dilemma for Kenya's big Western donors with his trail for crimes against humanity due to begin in The Hague, Netherlands for orchestrating tribal violence five years ago.

According to observers, if he became the elected and declared president by the Kenyan election commission, the Kenyan President will become the second African President after Sudan's Omar al Bashir to be indicted by the International Criminal Court (ICC).

However, there is no comparison between the two men, as the first is politician influenced by his father's history and by his own experiences, while the second is just a thief from the officers of the army, who has stolen the political power in Sudan by night to lead one of the severe fundamental Sudanese dictatorial regimes. 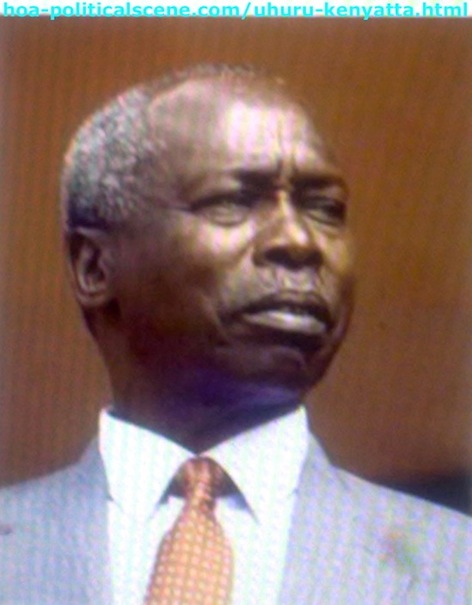 The head of the defense lawyers of the elected President Uhuru Kenyatta told the judges of the International Criminal Court last Monday the prosecutors should drop the case against the Kenyan President for lack of evidence.

Uhuru Muigai Jomo Kenyatta was born on 26 October 1961. He served as deputy Prime Minister since 2008 and was the member of the Parliament for Gatundu South Constituency. He was the Chairman of Kenya African National Union (KANU), which was part of the party of National Unity (PNU). 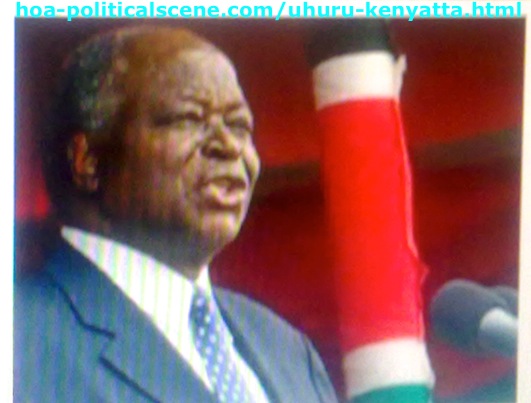 His father, Jomo Kenyatta, was the founder of the party and the Kenyan revolution and its revolutionary army the Mao Mao (Mau Mau), which was a socialist liberation movement.

The liberation movement united Kenya and led to the independence of Kenya from Britain and then Kenyatta the father of Kenya became President of Kenya during 1964-1978. His tribal origins belong to the Kenyan Kikuyu tribe.

The word Uhuru which the new Kenyan President bear as his name mean freedom in Swahili. He started his eduction at St Mary's School in Nairobi and then went to the United Kingdom to attend Amherst College, where he studied political science.

Uhuru Kenyatta was nominated to the Kenyan Parliament in 2001, then became Minister for the Local Government during the reign of President Daniel Arap Moi. Former President Moi has favored him, as his successor. 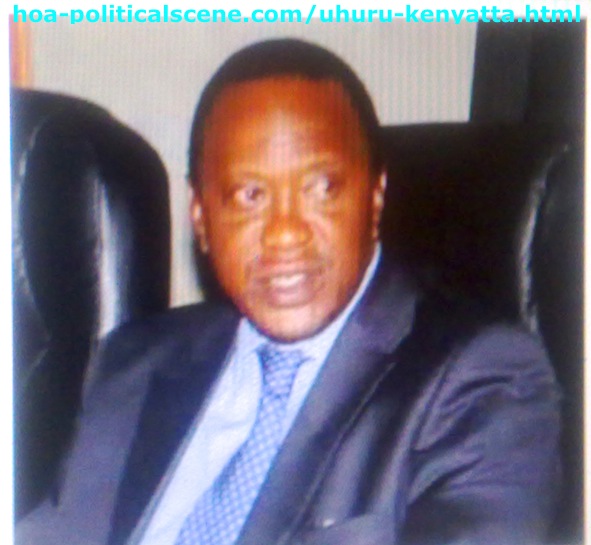 Then he ran as kenya's candidate in the presidential election in December 2007, but he lost in front of the opposition candidate Mwai Kibaki by a large margin.

He became the leader of the Opposition in the Parliament and backed Kibaki for re-election in January 2008 and he became Deputy Prime Minister and Minister of Trade in the coalition government in April 2008.

He entered the Kenyan political scene when he was elected as the chairman of the ruling party KANU in 1997 for his home town branch.

In 1999 Moi appointed Uhuru Kenyatta as the chairman of the Kenyan Tourism Board to work with Kenyan political power broker called Nicholas Biwott who as at the same time the right hand assistant of Moi.

Biwott occupied also many posts as minister during the terms of Jomo Kenyatta, Daniel Arp Moi and Mwai Kibaki.

In 2001, Uhuru Kenyatta was nominated to parliament and subsequently to the cabinet as Minister for Local Government and on March Uhuru was elected as one of the four national vice-chairmen of KANU.

These attempts of Moi upset many strong leaders who left KANU to form another party named Liberal Democratic Party.

In late 2005, Uhuru Kenyatta defeated Nicholas Biwott for chairman of KANU and got 2,980 votes among the party delegates leaving 622 members to his rival, Biwott. 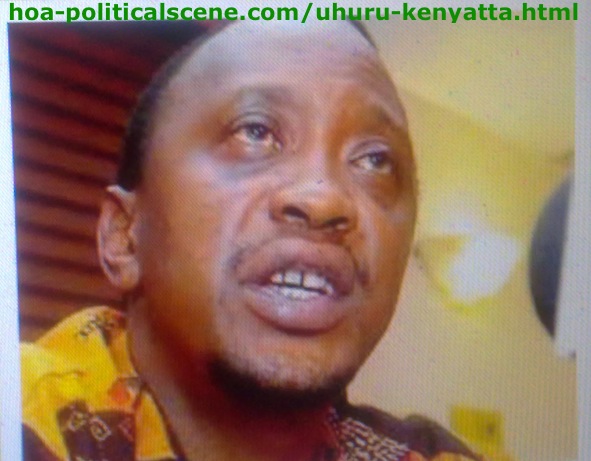 In addition to Uhuru Kenyatta you may also be interested in the following Kenyan political topics:

If you liked this page about Uhuru Kenyatta, please tweet it, share it with your social media services and pin the pictures. Thanks.

You can use the following comments from to comment on Uhuru Kenyatta.

Jump So High...So High With SBI!