I know that the Sudanese Apprehension to some political issues is difficult. The understanding capacity is different from person to person and from people to people.

The sequence is well done on the HOA Political Scene alphabetically and numerically in so many episodes. There are more than 100 episodes, in fact. This is episode 3 of the Sudanese sequence of political articles. 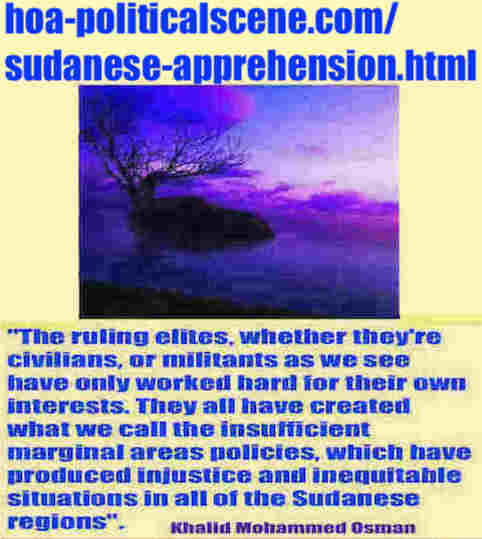 The Sudanese articles sequence is done out of Comments on Sudan, the HOA's "readers write good" to add new political insghts to the HOA Political Scene Blog.

After reading episode 3, Sudanese political apprehension here, you should continue to episode 4 at "Sudanese Aspects". Follow the series to understand the political issues in Sudan.

See the alphabetical and numerical order?

I mentioned on the first line up that the understanding capacity is different from person to person and from people to people. it is so by such terms, different from society to society.

Understanding is a mental mechanism and is active part of the work of the brain. It has also many functions dependent on other parts of the mind "the memory", for example, which stores lifetime experiences.

Out of long lifetime experiences educators, intellectuals, intelligentsia, mentors and motivators rise by knowledge to educate and help other people understand all of the circumstances and the development of any society in the world, whether in art, culture, economy, health, politics, or social affairs.

This is in general. As for Sudan and the other states in the Horn of Africa, we have some of those intelligentsia who provide the Horn Africas Network by their knowledge. Some of them are fellow readers of the HOA Political Scene Newsletter.

As for Sudan, we have massive contribution, I published and am still publishing in the mentioned sequence of Sudanese articles. Any part of this episode you'll read here is intended to bring you good insights on what's going on in Sudan.

What those Sudanese intellectuals have in their hearts and minds is acquired through long decades of burning by the political tragicomedy in Sudan. Their experiences are what you need to assimilate the political problems in Sudan easily.

The new Sudanese Apprehension you need to assimilate hard political conditions could be achieved by reading to those Sudanese intellectuals whose fires of anger is still burning in their hearts and minds.

It is all here done for you in good editorial content to delve into insightful Sudanese political stories, Eritrean stories and political stories from Chad, Djibouti, Democratic Republic of Congo (DRC), Eritrea, Ethiopia, Kenya, Somalia, Somaliland and Uganda.

To my surprise all of the meaning of "apprehension" are applicable in Sudan. We see the "fear" the totalitarian regime imposes and the "detention" alike have political goals.

You'll be inspired to become more of a doer, while participating in any Sudanese intifada to expel the military religious regime and erase all of its conducts and schemes.

What I have mentioned above is not the main topic of the Sudanese political apprehension, nor the purpose of publishing it. It is only an intro to the topic of the page. Here below is the heart of the "Sudanese Apprehension". 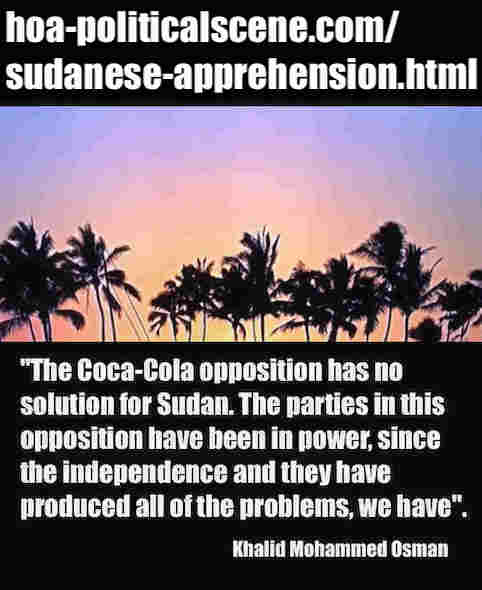 The policy of burning the political stages in Sudan and burning the sectarian parties with it, as I have mentioned earlier, has been succeeded dramatically to bring Sudan into chaos and continuing disasters.

It made it two Sudan(s), when for the sake of implementing the Sharia Laws, the ruling National Congress Party have plotted to isolate the Sudanese opposition in Asmara and Addis Ababa and break it.

The regime did that by attracting the Sudan's People Liberation Movement (SPLM) to sign a secession agreement with it called the Comprehensive Peace Agreement, which is in fact illegitimate.

No one has ever mentioned this fact during that time, even before sogning the secession agreement, but only I am, the Sudanese journalist Khalid Mohammed Osman.

Everything about the policy of burning the political stages is in fact the real tragedy we have in Sudan and that tragedy has been planned for the entire country to face such political problems continuously.

We need a common sense together. Not only that, but we need to have different mentalities to look into such issue. That will never happen, if we still have faith on such parties. 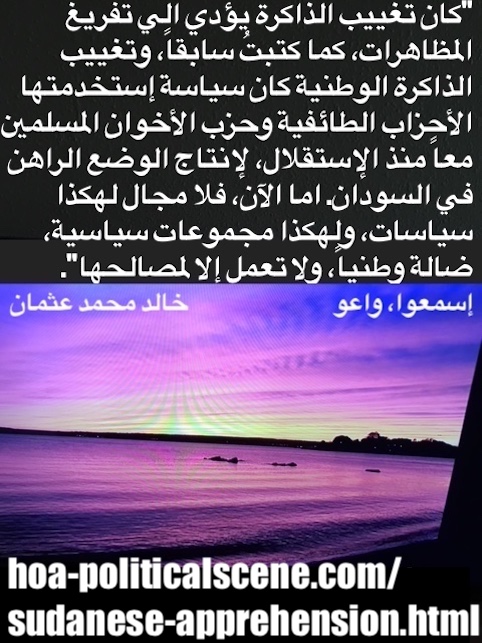 * Sudanese Apprehension: Are You Intellectual 8: "Let Me Die with My Enemies" is a Reckless Policy of the Sudan's Dictatorial Regime: عليّ وعلي أعدائي سياسة متهورة لنظام السودان الديكتاتوري

The dictatorial regime implements the method of "Let Me Die with My Enemies", whenever it comes into crossroads to face political opponents, or angry demonstrating Sudanese people, or even those people demanding the surrender of the regime's criminals to the International Criminal Court (ICC).

So, the regime practices this method, carefully, by getting the impression of everything out. The leader of the regime is not Samson, though.

He played so, when the ICC issued the arrest warrant to get him to the court. See Omar al Basher's indictment.

When Samson lost his power and then he couldn't find any solution to his situation, he used all the might left on him to push the pillars of the temple to destroy it, and to die with his enemies there inside the temple. He said that phrase.

The Sudanese regime of Omar al Bashir, which is accused of crimes against humanity, internationally and considered the worst of the other Sudanese dictatorial regimes, interiorly comes to such stupid solution because it knows that the people might believe the craziness of the regime and retrain.

But, unfortunately, they won't. So, the regime keeps on pushing its security agents to do the dirty work against the peacefully demonstrating people during the Sudanese rising.

Until the recent Sudanese uprising, which has started in last December and continued until this moment with un presented public persistence, the regime's security agents bomb the Sudanese people in the Sudanese revolution, kill them during the Sudanese intifada, imprison many of them and torture them to death in detention houses.

However, the Sudanese protests continue. The people are determinant this time and they are demanding this bloody regime to step down and to pave the way for democratic bodies in the Sudanese revolution to take over to create a new Sudan.

Nevertheless, many public characters from the Sudanese political parties are now awake to share and take advantages of such transmission. This is an act that should never be accepted, because the Sudanese sectarian parties are the real cause of all of the political problems in Sudan.

They had been in power, once and they proved to lack any sense of ruling this state. They don't have any good solution plan to the political problems in Sudan, which they have created.

They are part of the misery and part of the Sudanese octopus policy and disruption of the history movement. Not only that, but they are in fact part of the catastrophe in Sudan. 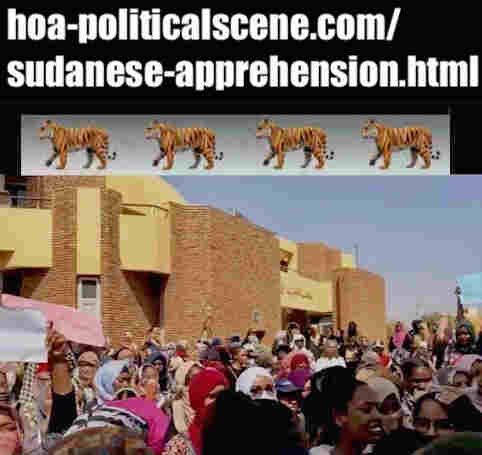 What Do You Think of the Sudanese Apprehension?

Did you find the Sudanese Apprehension useful?

Use the Comment C2 Entries form to comment, or to write about Sudan. Your comments will add values to the "Sudan Online" platform.

In addition to Sudanese political apprehension and the Sudanese issues you read, you might be interested in some documentary movies about Sudan. You can watch all of that on documentary film at TVCinemaApp.com.

Comments on Sudanese Apprehension, or new entries on Sudanese issues appear at the section of the page below the comment form. If you didn't comment, or write about any issue in Sudan, please do that now. Thanks.

Climate change with its epidemics, hazardous waste and nuclear and chemical weaponry threaten the masses everywhere. The global masses should put an end to all of this. The LPE of the masses era is the global dynamics (solution) to all of this. It is the only process to make the world better. Veteran activist, journalist and poet Khalid Mohammed Osman provides it.